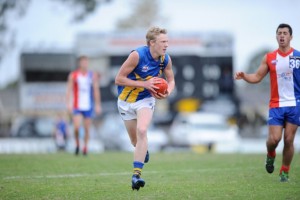 The Western Jets and its major partner Victoria University in 2014 enter into the 15th year of their association.

Victoria University and the Western Jets have participated in a number of projects throughout their partnership. Some examples of this have been the football in schools (FIS) a football participation program in primary schools conducted by VU pre service teachers. Another program has been the vocational education and training program (VET) a secondary school program with a TAFE based certificate with a football development program for students.

One of the most successful ventures has been the career and professional development placement program for students. Many students have taken the opportunity to do their field placements with the Western Jets. Many of these students have subsequently been employed in the AFL industry.

The partnership also provides the Western Jets with the opportunity to use the state of the art facilities at Victoria University and the expertise of staff. Victoria University being recognised as one of the leading sports universities in the country.

The Western Jets are very grateful for the support of Victoria University. Both organisations share the same common goal that is to assist youth so that they meet their full potential.