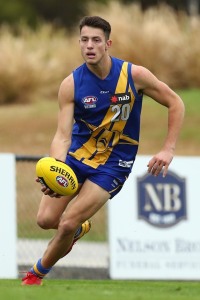 From the opening bounce Gippsland Power opened up proceedings with the first goal, they were fighting hard early and the Jets looked a step behind. It was Aaron Clarke who steadied the ship to kick the Jets first goal.

Jonah Horo was looking slick in the midfield and Will Kennedy was back to dominating the ruck. Archie Manton was next to mark in the goal square and boot the Jets second. Gippsland kicked goal late but the Jets responded quickly through Clarke to kick his second. With only seconds remaining a quick play from the centre found Emerson Jekka lining up directly in front goal. He made no mistake to end the term.

The second quarter started off with a bang, Jonah Horo burst into the inside 50 and kicked his first for the day. The Jets were firing and Gippsland was starting to feel the heat. Power was struggling to hit their forwards because Jets co-captain Lucas Rocci and Josh Kellett, were rebounding everything in site. Gippsland only scored one behind for the term while Samuel Clifford kicked another for the Jets late.

The third term had the Jets begin where they left off. Eddy Ford claimed his first major and the Jets were flying. But Gippsland was not going away without a fight. After Ford's goal, the Power kicked five unanswered goals heading into the last term.

The Power had crept in but this was the day of the Jet. Daniel Pantelleresco fired after a quiet day at the office followed by Emerson Jekka to keep the game out of Power's reach. From there it was all a matter of winding the clock down.

Hero of the day: Jonah Horo
Horo is a soldier for the Jets, he follows instruction to the letter and never deviates from the game plan. He finished the day with 20 disposals, 9 tackles, 5 marks, and 1 goal.