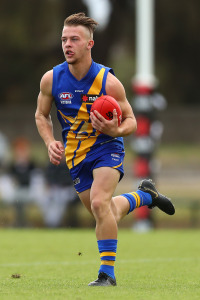 It was a tough defeat for the Jets last Saturday as Dandenong showed Western why they were last years premiers. The final siren saw Dandenong walk away with a comfortable margin of 16.13(109) to the Jets 6.10(46) at Downer Oval.

The Jets started off well as their first clearance resulted in Aaron Clarke clunking a good mark off the lead and kicking truly for Western. Forward intensity by the Jets was suffocating the Stingrays early as their mistakes gave Western plenty of opportunities at goal. Unfortunately, the Jets were unable to capitalize in front of goal as inaccurate goal kicking would come back to haunt them. Dandenong hit back with a slingshot set play that had the Stingrays outrun the Jets going cost to cost. Dandenong followed up with another major to hit the front, their outside run proving to be a problem for Western. Archie Manton responded to a much-needed goal to edge the margin but Dandenong fired back quickly to end the first term.

The second quarter had the Stingrays brought a whole new meaning to the word intensity. A bombardment from Dandenong eventually saw their players marking in the goal square of their attacking 50. Numbering off was becoming an issue for the Jets as some Stingers roamed around the field unchecked. Thankfully Jets star Jonah Horo stood up in front of goal as Westerns situation looked dire. Eddy Ford was next to answer the call as the Jets slowly clawed back the deficit. Ford, Horo, and Dally Andrews were working overtime in the midfield. Darcy Cassar was no different in the backline as he continued to stand up with a defence under siege. Dandenong would land another late blow just before halftime as all the Jets hard work still had them chasing tail.

The premiership quarter had Dandenong show real class against the home town heroes. They scored two unanswered goals as the structure of the Jets began to break down. Western had their opportunities late but kicked one goal from four opportunities. The final quarter was more unfortunate for Western, Dandenong would pile on five goals to Westerns' one. Ford was one of few shining lights this term, but he managed to kick his second major for the day to end a poor game.

Hero of the Day: Eddie Ford

Gut running with a pure determination to win the football saw Ford the hero of a bad game. His only flaw was his willingness to play on at every opportunity which sometimes got him in trouble. Ford finished the game with 20 disposals, 2 goals, and 10 marks.