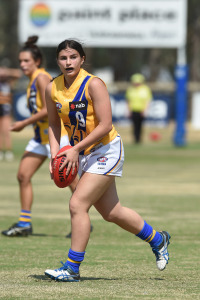 We now reach the end of NAB League Girls season as the Western Jets play one last game. The Jets had a rusty start to the season, but have been performing solidly after defeating the GWV Rebels in Round 5. Western now has three victories under their belt which is a huge improvement when comparing their last two seasons. Dandenong is the end game for the Jets story of 2019. They will present a huge challenge for Western but now the Jets have all their stars back and are ready to finish this season with a happy ending.

Brooke Vernon vs Cleo Saxon-Jones
When it comes to defensive rebounds, Vernon is the queen of the competition. Saxon-Jones has the height on Vernon but must clunk the marks as she did against the Tasmanian Devils. If the ball hits the ground Vernon will take the advantage. For those following the VFLW, Cleo Saxon Jones has signed with Melbourne University and will compete in the 2019 season.

Georgostathis has played predominately across half-back, but might be pushed into the midfield to battle St Kilda's new recruit. Shannon was signed earlier this year by the Saints and will compete in the AFLW season for 2020. Georgotsthis has been absolutely dominant this year, if she can get the better of the young AFLW star, it could prove vital heading into this year's draft. For those following the VFLW, Elisabeth Georgostathis has signed with the Western Bulldogs and will compete in the 2019 season.

Another Siant in McDonald will participate in her last game for the Stingrays, she was signed alongside Shannon as St Kilda builds its list for 2020. Shannon will provide a hard contest but Grant should be up for the challenge. Both midfielders are having a stellar season and since this game will be their last at NAB League level, expect the gloves to come off.