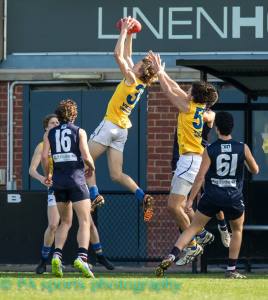 Congratulations to Western Jets Co-Captain Oscar Junker for being taken at Pick 28 in the Rookie Draft.

This caps off a massive two years for Oscar since beginning his TAC Cup journey with the Jets. Junker was a fantastic contributor as a bottom aged player winning the Western Jets Best First Year Player award.

This year in his eighteenth year after suffering a shoulder injury over summer came back into the side and had a very consistent year finishing runner up in the Barry Round Medal and also earning selection for Vic Metro in the AFL U/18 National Championships playing one match against South Australia. The Kangaroos have picked up a very versatile player who can play in all three areas on the ground, is excellent overhead and a booming left foot kick. Oscar is pictured below taking a customary overhead mark.