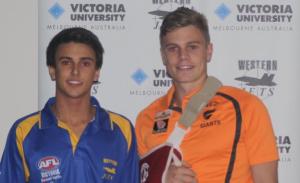 Congratulations to Brayden Monk who has won the 2014 Western Jets, Barry Round Medal as the best and fairest player.

In his first season on the Western Jets TAC Cup list, the 18 year old Werribee Districts Junior footballer played 17 games for the Jets this season finishing in the best 6 players on 12 occasions. This included two best on ground performances in Round 3 against Oakleigh and in Round 12 against the North Ballarat Rebels.

Monk played most of his footy this year on a wing where he was able to run and carry the ball and open up opposition sides with his pace and agility. Brayden also possesses great endurance and this was evident by his efforts late in games to help us get over the line in some tight contests. Brayden also showed a capacity to move into the centre bounce and become an effective inside player later in the season averaging over 3 clearances a game in the second half of the year.

At 173cm and 62kg Brayden's courage and attack on the ball is amazing for a player of his size and it is expected that with some natural development that Brayden can mature physically to become an even better player next year.

Brayden is pictured with former Jet Adam Kennedy who was a guest speaker on the night. Monk's journey has so far been very similar to Adam's and hopefully that can continue as Adam came back as a 19 year old and after his second steller season at TAC Cup level was drafted to the GWS Giants.