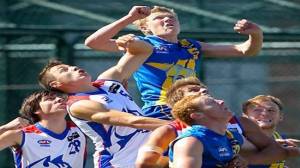 Western Jets Midfielder/forward James Sicily has been selected at selection 56 in the AFL National Draft to the Hawthorn Football Club. Sicily had an excellent season with the Western Jets in season 2013. He represented Victoria Metropolitian in the AFL National U/18 Championships, was selected in the TAC Cup Team of the Year, finished 3rd in the Western Jets Barry Round Medal as well as being awarded the Most Consistant player for season 2013. James is an exceptionally talented player, clean ball handler, very capable overhead, reads the game very well and has a canny knack of finding time and space. Sicily's selection with the Hawks is an outstanding opportunity and everyone at the Western Jets wishes James all the best as he embarks on an AFL career. Congratulations James.