EKC makes it 3 wins on the G 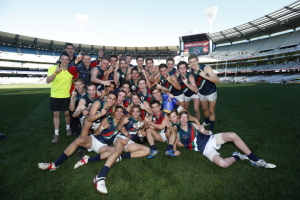 On Sunday the 21st of July the Senior Boys football team make the trek to the MCG for the 4th successive year, playing in the Premier League Grand Final as a curtain raiser to the Richmond Fremantle clash. Once again the boys lined up against rivals Hallam secondary College, this being the 4th year straight that these two schools have met on the big stage. Leading up to this year, EKC was ahead on the ledger 2-1.

The conditions early on in the day were wet and slippery, which made ball handling and skill execution difficult for both sides. The boys started reasonably well, though were wasteful in front of goal, and were at times exposed by Hallam’s run and spread. Despite the boys efforts, EKC went into the half time break trailing on the scoreboard.

As the second half started the boys started to click into gear and were able to wrestle back the ascendancy, playing more of an EKC brand of football. As the conditions improved, so did the boys skill execution and goal conversion.

The last quarter was a tense affair, with EKC holding a narrow lead during most of the quarter. In the closing stages of the match, some undisciplined acts saw the boys receive a free kick and 50m penalty, resulting in a match sealing EKC goal. The final margin was only 12 points, making it the closest and most dramatic of all of the 4 grand finals.

The team was well led on the day by one of our co-captains, yr.12 student James Latham. The Best Player Medal for EKC (the Mitch Turnbull medal) was awarded to yr.11 student Caleb Harward who performed an excellent shut down role on arguably Hallam’s most talented player. There were many other exceptional performances from EKC players on the day in all areas of the ground. EKC was also represented by two yr.10 students in Hisham Kerbatieh and Bruno Laguda who both performed their roles admirably.

EKC now move on to play St Patricks College Ballarat in the semi finals of the Herald Sun Shield competition, with the prospect of making another grand final on the MCG.