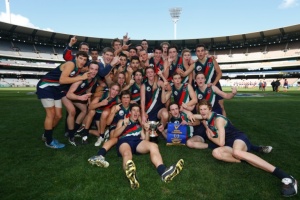 For the fourth year in a row our senior boys Football Team will be playing off against Hallam Senior College on the MCG to be named School Sport Victoria Premier League Champions. With the tally between the two schools at 2-1 in our favour, our boys are determined to claim a record 3rd premiership on the hallowed turf of the “G”.

After fairly convincing wins in our pool matches against Catholic College Bendigo and Bendigo Senior Secondary, the semi-final was a much closer affair. Facing a fired up and much improved Box Hill outfit, our boys were outplayed in the first quarter and trailed by 3 goals at the first break.

The second term saw us play more of the EKC brand of confident, attacking free flowing football and we were able to draw level by half time. The second half was a see-sawing affair with the defensive pressure from both teams meaning that goals were extremely hard to come by.

By the final siren EKC was able to hold on to a 6 point lead which was enough to secure a spot in our 4th consecutive grand final on the MCG.

The team was lead for the day by year 11 student Matthew Stillman as captain and the best player medal was won by year 12 student Jarryd Bonello, but this game, as with every game prior has been won by an even contribution from all 24 members of the team.

Our Grand Final will be played on Sunday July 21st as a curtain raiser to the Richmond vs Fremantle A.F.L. Clash, where up to 4 EKC football program graduates will be playing for the AFL sides in the main game.