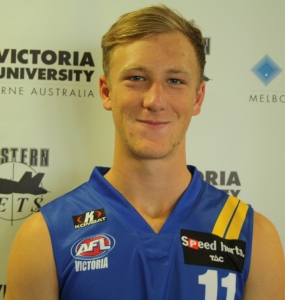 
This scholarship is in memory of Western Jets player Nathan Prince. The scholarship is awarded to a player who has shown promise both on and off the field and has shown a keen interest in pursuing further education after high school. It is highly sought after by many players and is a great way to remember Nathan.  We remind players that education is one of the clubs main priorities for players and it is a testament to current players with many wanting to continue their education after high school.

Harrison was a member of the 2011 U16 Brad Johnson squad and the 2012 Western Jets TAC Cup squad. He finished his VCE last year and was successful in being accepted into a Bachelor of Exercise and Sport Science at Victoria University. We wish him all the best both with his studies and with football in 2013.