Evans selected in TAC Cup Team of the Year 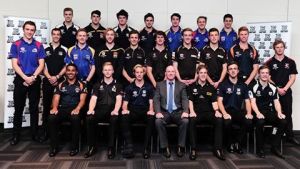 BILLY Evans has capped an outstanding season with the Bendigo Bank Pioneers Football Club by being selected in the TAC Cup Team of the Year.

Evans was selected on the interchange for this year's All-Star line-up.

A great year for the Sandhurst player included being among Victoria Country's best in the national under-18 championships campaign.

Evans was the Pioneers leading vote-getter on seven in the Morrish Medal, the TAC Cup best and fairest award which was won by Gippsland Power's Alex Carr.

Votes for the Bendigo Pioneers in this year's Morrish Medal award: