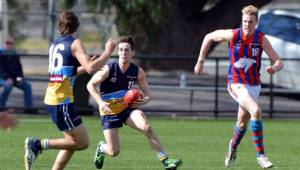 OAKLEIGH charged to a 76-point victory against the Bendigo Bank Pioneers in Saturday’s TAC Cup under-18s football match at the QEO.

The Chargers slammed on 7.6 to nil in the last quarter of the curtain-raiser to the VFL clash between Bendigo Gold and Collingwood.

It was another dramatic fadeout by the Pioneers, who were within 28 points at three quarter-time.

Bendigo’s accuracy played a key part in a 30-24 lead at the end of the first quarter.

Highlights in the opening 30 minutes included a running goal by Sandhurst’s Harry O’Meara from a tight angle in the Rifle Brigade Hotel pocket at the city end.

An intercept by Eaglehawk’s Jake Stringer was capped by a goal by Echuca-based captain Oliver Wines.

Sandhurst’s Alex Hywood, Boort’s Jonathon Lanyon and Moama’s Christian Burgess were all on target in a promising start by the Pioneers.

In the second, Oakleigh continued to dominate around stoppages and continually pumped the ball into attack.

A run of five unanswered goals was broken when Stringer goaled on the run and Hywood was freed in a marking contest to cut Oakleigh’s lead to 15 points at the long break.

Interchange options for the Pioneers were down in the second half as Strathfieldsaye’s Luke Marchesi, knee, and Cohuna’s Ben Archard, hamstring, were out of the game.

Oakleigh raced to a 36-point lead by the 16-minute mark.

Wines roved a contest and snapped truly on his left in the 23rd minute and Stringer showed great skill to rove a boundary throw-in and goal.

The Pioneers would add just one more point as Oakleigh seized control in the final term.

Jesse Collins from Lockington-Bamawm United defended and rebounded well to be the Pioneers best player.

Stringer’s play in attack and when ruck-roving set up many of Bendigo’s shots on goal, while O’Meara won many possessions.

Pioneers coach David Newett said there were more “painful lessons” in the loss.

“We were in the contest for most of the day and fought back well in the second and late in the third quarter.

“We just dropped our intensity and run, and Oakleigh lifted.”

The Pioneers have a break this weekend before their final home game of the season on August 18 against Western Jets at Epsom-Huntly Reserve.