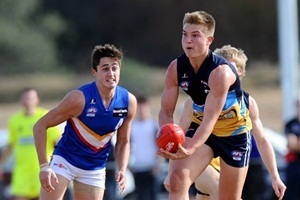 Wines is considered a certainty to be drafted and could follow in the footsteps of last season’s Pioneers skipper, Sam Kerridge, who debuted for Adelaide against Hawthorn in round three.

Wines, from Echuca, has boosted his recruitment stocks with a superb national under-18 championships campaign for Victoria Country.

The Pioneers captain has been named in the best players in each of his three games at the carnival and Newett believes the strong and physical midfielder has shown he could play AFL in 2013.

“He’s basically ready to go, give him an AFL pre-season and his body could handle that straight away,” Newett said.

“I think that’s what’s going to be the attraction (for clubs to draft him), if anyone’s looking to rebuild their midfield and if they’re looking for another inside-type middy.”

Wines’ work around the clearances has been brilliant at the under-18s carnival, with the 17-year-old winning a stack of contested possessions.

In last Friday’s 15-point loss to Victoria Metro at Geelong’s Simmond Stadium, he had 18 touches – 13 contested – with a goal, six tackles and four clearances.

He was named fifth best by Victoria Country’s coaches, but as the best by afl.com.au reporter Ben Guthrie for his “unrelenting attack on the ball”.

In his first match at the championships, a big win against Queensland, Wines was named second-best after gathering 31 possessions – including 17 contested – with a game-high five clearances for the team, which is coached by former Bendigo Pioneers mentor Mark Ellis.

He was third best in a three-goal loss to Western Australia in Perth a week later, where he had 13 contested possessions in his 24-disposal game, along with seven clearances and six tackles.

Newett said Wines’ ability to beat a man and win the footy under pressure marked him as a probable high draft pick.

“We’d certainly be hoping on his performances that he’s gone up the order in the draft,” Newett said.

“He reads it really well, too, to get into the stoppages so he can get front position and his body work has got better, his ability to win one-on-ones.”

Wines is expected to play in Victoria Country’s final game of the championships against South Australia at Etihad Stadium tomorrow, alongside Pioneers team-mate Jake Stringer, who impressed in the TAC Cup action on Saturday.

Stringer, who went into the national championships underdone after returning from a broken leg, rediscovered some form as he picked up 25 possessions, multiple centre clearances and a goal against Sandringham Dragons, playing mainly in defence and the midfield.

“He was on restricted game time, he was really, really good. He had a brilliant last quarter,” Newett said.

“He ended up with 25 possessions and he only played 50 per cent game time which was what was planned to give him the best preparation going into the Vic Country versus South Australia game.

“Hopefully now he can hit the last game up and running and then lead into the back end of our season.”

The Eaglehawk Football Club products 192cm and his versatility – he kicked nine goals in his return TAC Cup match versus Northern Knights – makes him a strong chance to be drafted.

“Everyone’s confident Jake’s going to get drafted, it’s just a matter of where,” Newett said.

“Once he gets in the system he’ll just go through the roof in terms of his application, he’s certainly got the attributes.”

Meanwhile, the Pioneers will play Saturday’s match against Geelong Falcons at Strathfieldsaye’s Flight Centre Park due to the continuing unavailability of its home ground at Epsom-Huntly Recreation Reserve.

Bendigo and Geelong do battle from 1pm.

The club has also announced Stringer as its ambassador for a new sponsorship deal with Holiday Inn hotels, which will provide accommodation to the Pioneers and their families in Melbourne this season.