Inside the Pioneers' inner sanctum 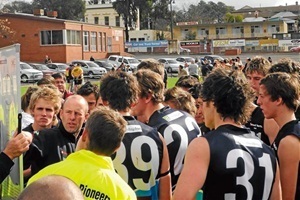 It’s 10am on June 17 at the Queen Elizabeth Oval and many of the Bendigo Pioneers players are already in the changerooms – two hours before a clash with the Dandenong Stingrays.

It’s a big game for the Pioneers. Last start they were disappointing in a 28-point loss to bottom-team Eastern Ranges in a game almost everyone expected them to win.

Expectation is not something Pioneers players have had had to deal with too often in recent years, but it’s part of a positive step forward under new coach David Newett – a former North Melbourne and Richmond development coach – who has put his own stamp on the team with his professional approach.

Two victories inside the first five rounds – including a 100-point belting of the Northern Knights – has seen the club total as many wins so far this season as in the past two years.

Prospects are improving and today is a good chance for another win.

Inside the rooms, coaches and support staff mill about as the players stretch, have their ankles and shoulders strapped and get rub-downs from the trainers.

Posters on the walls remind the players of the team’s values, such as responsibility – to the club, their team-mates and themselves – and putting the team first.

In a separate lecture theatre-style room, Newett prepares a laptop and projector for the team meeting and writes the side’s key performance indicators on a whiteboard.

With him is Wes Lewis, a Pioneers satellite coach in Swan Hill, who has travelled down to be the team’s defensive coach for the day.

Newett explains the style of footy the Pioneers want to play to Lewis, expressing his disappointment at how far off the game plan the side was against Eastern Ranges.

Slow starts or one poor quarter have often cost the Pioneers this season. Eastern kicked four goals to one in the opening quarter last game, while the week before the Murray Bushrangers booted five goals to nil in the first term.

But assistant coach Peter Gibbs believes the ninth-placed Pioneers can end its three-game losing streak and says concentration and confidence are the two keys to defeating Dandenong, which is seventh.

“They have plenty of potential, they’ve just got to believe in themselves,” Gibbs said while watching the players warm-up.

“And they need to stay on task, it’s clichéd, but it’s true.”

It’s one hour before bouncedown and Newett reminds the players of their structures and key performance indicators – such as turnovers, hard-ball gets and handball receives – before he goes through the selected side in their positions.

He asks for a lift from Vinnie Flood, the creative spark and excitement machine up front, and more intensity from key forward Alex Hywood, who is integral to the Pios attack with his lead-up play and score assists.

Kieran Bell and Isaiah Miller are given licences to run from the backline on the rebound, with Luke Marchesi a key link in the chain playing off a wing.

After a 30-minute warm-up on the QEO, the players congregate with Newett for his final message.

A video cut from the Eastern Ranges match to the Linkin Park song Breaking the Habit plays on the closed door, with Newett stressing final points before bouncedown – to impact the contest, be hard at the footy and to believe they can win.

Can the Pioneers break their habit and get off to a fast start?

While the Pioneers’ intensity and work rate can’t be questioned, the side lacks run and spread and continually breaks down across half-forward.

Newett stays positive in his quarter-time address, his team will have the breeze and he encourages them to take the game on.

It worked. Within 30 seconds of the restart Bendigo strings a chain of handballs together and Marchesi kicks a superb drop punt from outside 50 which bounces through for a major.

With better supply, full-forward Billy McIness imposed himself on the play and booted two goals to put his team in touch with Dandenong 3.0 (18) to 6.8 (44).

The players and coaches are up and about in the rooms at half-time. A good third term can set the Pios up for a last quarter charge and Newett again tells his team to run, “look out your ears” and to stay composed with the ball.

A Dandenong goal within the first minute of the second half hurts the Pioneers and the Stingrays add another, before McInnes boots his third to keep a glimmer of hope at 4.3 (27) to 8.11 (59) at three-quarter time.

An inspirational piece of play from Christian Burgess – who evaded two tackles and snapped a major at the four-minute mark of the last quarter – gave the Pioneers some hope, but it was to be the team’s only goal for the term as the score finished 5.4 (34) to 10.14 (74).

Bell, Flood, full-back Ben Archard and McInness all featured in the Pioneers’ best players, as did fourth-gamer Comanche Walls – who impressed with his attack on the footy – while midfielder Jacob Chisari gave his all in a best-on-ground display for Bendigo.

Understandably, it was a sombre mood in the rooms post-match.

The Pioneers won the inside-50s and clearances and – from quarter time until midway through the last quarter – they outscored Dandenong.

It was just the first quarter which cost them a chance of victory.

The players assemble with Newett, who asks them “does it hurt?” to lose a game they could’ve won.

The consensus from the players and coaches is there wasn’t enough on-field leadership to structure the team when Dandenong got the jump.

“We’re just looking for some leaders to start the games,” Newett said following the loss.

“It was a focus going into the game, unfortunately we just let ourselves down with five goals to zero in the first quarter.

“Then we were playing catch-up footy again.

“I was very happy with the way we fought out the game, but it was already over; five goals is a big lead to give up.

“As the maturity of our group goes along we hope to eventually get that (leadership) into our group.

“It might not be for this year, but it might be for the young guys that are playing this year, for next year.

“It’s so they can really see the importance of that and take it on as a leadership role.”

Nobody can argue that the Pioneers are a work in progress and Newett has seen plenty of improvement since round one.

The challenge is reaching the required level for four quarters and continuing to improve in the coming seasons.

“We’re aiming to ramp up the under-15 and 16 program so we get those guys coming in and they already know the game plan and the way we play,” Newett said.

“Hopefully next year we can hit the ground running.”

There’s no doubt Newett and the club’s support staff are on the right track and, hopefully, this group of players is laying the foundations for a successful era to come.

Unable to display this Article. No presentation template was found : 175.