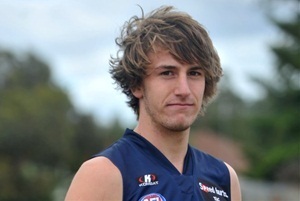 Bendigo Pioneers star Liam Byrne will have season-ending surgery on his wrist today.

Byrne, 17, had carried the injury throughout the TAC Cup under-18s season, but it became increasingly painful and he was told it needed to be operated on.

It’s a disappointing result for the South Bendigo gun, who was in stellar form for the Pioneers playing across half-back and through the centre.

“It’s very unfortunate for Liam. He’s been playing with a break in his wrist, that hasn’t been impeding him until now, but is getting gradually worse,” Pioneers coach David Newett said.

“On surgeons advice, for later on down the track, he is going to get it operated on, which basically rules him out for the rest of the season.

“He’s one we didn’t want to lose, that’s for sure, not that we want to lose anyone, but he’s been in good form and it’s a bit disappointing.”

Just last week, Byrne was rewarded for his good form with selection – alongside six Pioneers team-mates – in the 50-player Victoria Country under-18s squad to be considered for the national championships.

Newett watched the Bendigo players being put through their paces with the squad at Carlton’s Visy Park at the weekend and said Byrne was one of the better performers.

“(The injury’s) devastating for him actually, because he’s been going well and in good form and he went well at the trials yesterday,” Newett said.

Although Byrne is a top-aged player at the Bendigo Pioneers this season, he may be considered as an over-age player for the TAC Cup club in 2013.

The Bendigo Pioneers’ next game is a home match against Queensland at Collingwood’s Victoria Park at 11.30am this Saturday.

The club’s next match in Bendigo will be on Saturday, June 2 against the winless Eastern Ranges at Epsom-Huntly Recreation Reserve.

It will be the Pioneers first TAC Cup match at Epsom-Huntly this year.

The Pioneers are ninth on the ladder after seven rounds, one win behind eight-placed Dandenong and seventh-placed Geelong.