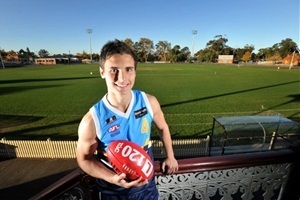 LEAving family and friends in Mildura to pursue his footballing goals was a tough call for Bendigo Pioneers rover Jacob Chisari to make over summer.

The 17-year-old was one of several young stars who relocated from the Sunraysia region to Bendigo.

Chisari has kicked on to be playing a key onball role with the Pioneers in the TAC Cup under-18s competition as well as adjusting to living away from home.

A key part of the process was starting year 11 studies at Bendigo Senior Secondary College where he is part of the specialist sport program.

Opponents for many seasons with South Mildura and Red Cliffs respectively, Chisari and Pioneers clubmate Peter Cua are housemates in North Bendigo.

“Moving to Bendigo was something I had thought about,” Chisari said of trying to limit the hundreds of hours that would be spent heading south and north for matches and training had he stayed in Mildura.

“David Newett (Pioneers coach) came up to Mildura and spoke to us about what the specialist sport program at BSSC was about.”

It was not long before Chisari was in Bendigo for pre-season and then school.

As well as study, the solildly-built onballer puts in many hours building up fitness and strength on the footy oval and in the gym.

Highs in his football career include his first senior match for South Mildura as a 15-year-old in 2010 and representing Victoria at the national under-15 titles in the same year. Chisari’s play for the Big V was capped by selection in the All-Australian team.

Last season he played a mixture of seniors and under-18s for South Mildura and he has played all five matches in his first TAC Cup season.

The Pioneers, who have a 2-3 record, take on Murray Bushrangers today at Princes Park in Shepparton at 1pm.

Chisari said despite last week’s loss to Calder, the Pioneers gained a lot of confidence from the way they played to be almost three goals up at the start of the final quarter.

“The last quarter was not our best football, but we had played well against one of the competition’s top teams,” he said of a clash watched by parents Frank and Wendy.

“We have to keep up the intensity all match,” Chisari said of efforts such as chasing, smothers, tackles and more against Murray.

It’s those areas Chisari knows he must keep working at in every match.