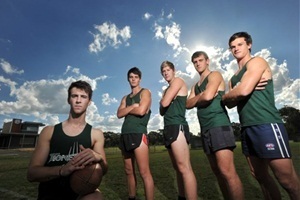 TRAVIS KING
When the Bendigo Pioneers run out onto Eureka Stadium in Ballarat this afternoon, five of the TAC Cup under-18 team will have come from Bendigo’s newest senior men’s football club – the Strathfieldsaye Storm.

Two of those players, Sam Heavyside and Vin Flood, are part of the Pioneers’ leadership group in 2012 and Heavyside will captain the team today while regular skipper Oliver Wines is in Europe with an AIS squad.

Strathfieldsaye senior coach Darryl Wilson said it would be a proud moment for the Bendigo Football Netball League club.

“This is only our fourth season, it’s a pretty big thing for a club that’s just started,” Wilson said.

“We’re fully supportive of the program to play at the highest level you can, obviously, the boys come back with great disciplines, skills and coaching.”

Wilson has made it clear the Storm will seek to develop its young players this season and he said the five Pioneers players represented the strength of the club’s juniors.

“I think it’s a great promotion for our junior program. If you play with us there’s some opportunity, even though we’re a new club it can happen for you,” he said.

“We’re really rapt and proud of them that they’ve been able to do this.”

Sandhurst is the next best represented BFNL club with four players in the Pioneers’ 43-players squad, while Kangaroo Flat has three young footballers training with the elite junior team.

South Bendigo, Golden Square and Kyneton have two players in the squad, while Eaglehawk and Castlemaine have one each.