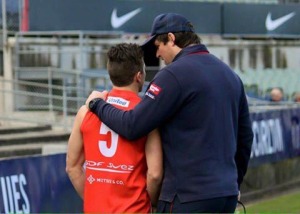 Originally from Heyfield, Leigh Brown had a distinguished junior career with Gippsland Power. He was part of the 1999 squad that made the TAC Cup Grand Final, winning the club Best and Fairest that year, along with the TAC Cup Coaches Award and being named in the TAC Cup Team of the Year.

Selected at pick 5 in the 1999 draft by the Fremantle Dockers, Brown played 21 out of the 22 games in his debut season and won the Dockers Best Clubman Award in 2001.

After playing 63 games and kicking 20 goals for Fremantle, Brown was traded to North Melbourne in 2002 and continued on as a key position player at either end of the ground.

118 games and 64 goals later, North Melbourne delisted Brown in 2008. Collingwood picked him up and Brown went on to become a pivotal player for the Magpies which culminated in the 2010 AFL premiership.  In total Brown played 65 games for Collingwood and kicked 54 goals.

In 2011 he took on an Assistant Coaching role under Mark Neeld at the Melbourne Football Club, looking after the forward line. After two years in this role, Brown returned to Gippsland Power to take on the head coaching role for the 2014 season.

2017 will be Brown’s fourth season as Power head coach. This year he will also be working with the Vic Country Under 18 team for the AFL National Championships in an assistant role.

Scott McDougal’s playing career focused around the Berwick Football Club where he played for over 10 years.

In 2003 McDougal took on the role as chairman of Selectors for R.O.C Football Club. He then moved into an Assistant Coaching role with VFL club Frankston Dolphins where he worked under coaches Brett Lovett and Shannon Grant.

After 5 years with the Dolphins, McDougal joined the Gippsland Power program in 2010 as an assistant coach for the TAC Cup team.

During his time with Power McDougal has also coached the clubs under 15’s, and in 2016 took on the head coach role of the TAC Cup Girls.

McDougal has also had a long association with the National Championships as an assistant coach with Victoria Country in under 16’s and 18’s (winning a championship in each division) and head coach of the under 17’s.

McDougal lives and breathes all things football and is currently attaining his level 3 coaching accreditation.

Originally from the Mallee town of Nullawil, Rhett McLennan moved to the Sunshine Coast where he continued his love of football through the junior ranks in which he represented Queensland in under 13, schoolboys and under 17 level.

After playing in senior premiership seasons with his home club, Maroochydore as a 16 and 17 year old, the next four years he plied his trade at state league level in the QAFL and VFL.

A country lad at heart, McLennan’s playing career shifted Leongatha where he was a member of the Parrots 2001 premiership.

Rhett pursued his passion for coaching and from 2003 onwards was a playing assistant for Division 1 senior level at Chelsea, Donvale and back at Leongatha. During this time he played deputy alongside former AFL players Adrian Whitehead, Brett Bowey, Brendan McCormack, Adrian Campbell and Will Thursfield.

For the past three years Rhett has been the forward line coach for Gippsland Power’s TAC Cup side. In 2017, he also takes the head coach reigns of Power’s under 16’s.

Peter Mongta is a proud Aboriginal who grew up in the small far East Gippsland town of Cann River.

A talented player, Mongta represented NSW in the 93 Teal Cup (which would become the AFL U18 National Championships)

Towards the end of 1993 Mongta was asked to play the final 4 rounds with Gippsland Power U18’s and then went on to play an entire season with Power in 1994.

Mongta’s senior playing career spread across a number of Gippsland leagues, including multiple premierships as a player and playing coach.

In 2015 Mongta returned to Power as an assistant coach and continued his work in the indigenous programs.

He coached the Victorian Indigenous State under 15’s at the National Carnival in 2016. This led to Mongta joining the AFL Flying Boomerangs program as an assistant coach. The Boomerangs squad, made up of the best 22 junior Aboriginal players from across Australia, went on a cultural exchange to China.