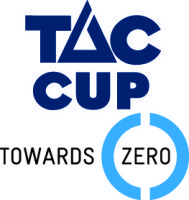 The TAC Cup is Australia’s premier under 18 Aussie Rules football competition with 12 teams from across metropolitan Melbourne and country Victoria.

Run by AFL Victoria, the competition focuses on developing young footballers to reach their maximum potential.

The TAC Cup provides a well-established pathway from elite level junior football to the AFL, VFL, and senior metro and country leagues.

In 2016, 44 TAC Cup players were drafted into the AFL, with the top 5 players selected all coming from TAC Cup clubs.

The Transport Accident Commission is now in their 26th year as major sponsor of the competition. The partnership supports a broader program that aims to develop and educate young players and prepare them for life on and off the field.

In the early 1990’s, Aussie Rules Football in Victoria was undergoing a major transition from the VFL to a national competition (AFL). With this change, the old metropolitan and country Victorian zoning recruitment method was no longer applicable and the leagues Under 19 competition was disbanded. A new elite level competition was formed as a replacement.

Gippsland Power, Murray Bushrangers, Bendigo Pioneers, and North Ballarat Rebels were all added to the TAC Cup in 1993, bringing the number of teams in the competition to 10.

In 1995 two additional metropolitan regions were established with Oakleigh Chargers and Calder Cannons included in the competition, with each geographical region around metropolitan Melbourne and country Victoria now covered.

Connect with the TAC Cup