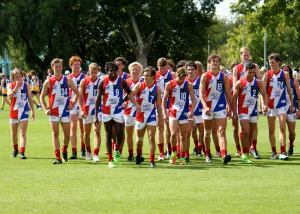 The selection process for the 2017 Gippsland Power TAC Cup squad started in October when over 150 invitations to train were sent out.

A player/parent information session was held in November where expectations and the training program were outlined and areas such as diet, nutrition and injury prevention highlighted.

Intra club practice matches and fitness testing were conducted in December, after which the first cuts to the playing list were made.

Group training re commenced in January and further fitness testing was conducted.

The list was finalised in the second week of March, the 40 selected players attended the TAC Cup fitness testing day in Maribrynong on the 11th March.

The captain, vice-captain and leadership group roles were voted on by the players at the preseason camp in Rawson using a 5,4,3,2,1 voting system.

After being in the leadership group as a bottom aged player last year, Aidan Quigley stepped up to the captain’s role this season.

An athletic midfielder from Yinnar, Quigley has displayed a solid work ethic over the preseason and will draw on his experience gained from the AFL Academy to lead his team.

Stephenson is coming off an exceptional first year in the TAC Cup where he was named Power’s best first year player. Porter also made a big impact in 2016, winning the most disciplined player award for Power and setting the standards in preparation and training for his team mates to follow.

Rounding out the leadership group is returning 19 year old Will Leslie (Sale) and Austin Hodge (Buchan).