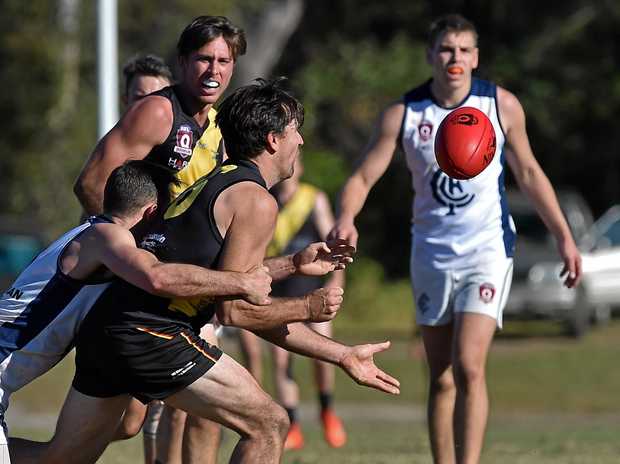 QUICK PLAY: Caloundra's Jye Storen gets the ball away. Patrick Woods
AUSTRALIAN RULES: They only just edged into finals and but now they're there, the Panthers are determined to cause some damage, according to centre half back Travis Gardiner.

Caloundra were amid a logjam of teams jostling for top-five finals berths in recent weeks.

It snared fourth place - just one win clear of seventh spot - to earn a home elimination final against Coorparoo on Saturday (2pm).

And Gardiner believes his team can push on.

"Everyone's excited at the club at the moment," he said.

ADVERTISING
"Expectation are quite high. We're hoping to go deep into the finals."

The Panthers will be without prized recruit Daniel Merrett this weekend, when the ex-Brisbane Lions star has media commitments.

But Gardiner suggested his side has the depth to cover.

"It's not going to change too much for us," he said.

"We played Coorparoo last time and Dan didn't play (in a two-goal win at Caloundra earlier this month). We've got enough forwards to cover for him so we're not too concerned about that."

James Barnes is in some form, including an eight-goal haul against Burleigh last month, while Trent Saxelby has been impressive at the back.

Gardiner expected a lively clash with the Kings..

"I think both teams like to play a free-flowing type of game with plenty of running," he said.