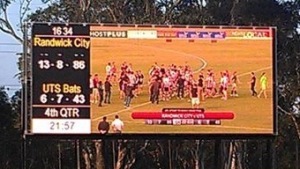 Randwick City Saints have claimed the first premiership in their clubs history by defeating UTS for the Division Five premiership by 43 points.

The Saints win was set up by a nine goal to one second term and from then on were never really troubled eventually running out 13.8 to 6.7 winners.

Nathan Pilgram was strong down back all day and receieved the best on ground medal, whilst Daniel Pezeshki provided a strong target up forward. Dimitri Garoufalis provided the main avenue to goal kicking five goals including four in a dominant second quarter.

For the Bats, Jimmy Levy provided plenty of run from the midfield being named their best whilst Tim O'Donovan and Thomas Hagglund ran hard all day.