It was also a memorable occasion for other reasons. A number of the male Rams players who were in the wedding party for Jeremy Rix and Jessica Hocking that day watched the game resplendent in their suits. Also, Kate went into the game on 96 career goals. After a nervous miss in the first term, she fired up in the second with three goals. But it took until the last two minutes of the game for her to slot her fourth for the day and 100th career goal, to the delight of everyone present.

Kate was one of the original Ramettes, playing in their first official match against (somewhat fittingly) Auburn in April, 2012. Her captain and vice-captain from that day, Jennifer Brown and Kirstie Burcher, were both present at Greygums to see Kate’s milestone.

The Ramettes weren’t Kate’s first foray into football. In 2011, she had done pre-season training with Sydney Uni and played a practice match with the Bombers, but found the travel too prohibitive. It was fortuitous timing therefore that the Rams decided to form a ladies’ side for season 2012, Kate finding out about it when her dad saw an advertisement in the Air Force news bulletin. The rest, as they say, is history. 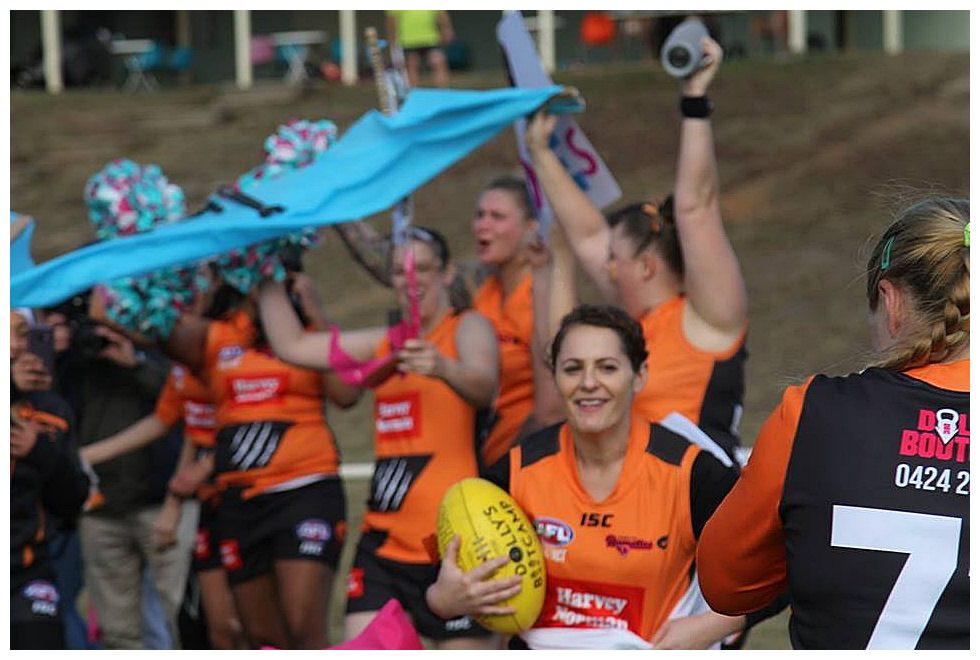 The first year for the Ramettes was exceedingly hard work for the girls. It was the first year the AFL had run the womens’ competition (it had previously been self-administered) and as a result was just the one division (it went to two divisions the following season). So the Ramettes copped their share of “football lessons” but fought on doggedly, continued to learn and were rewarded with a draw in the penultimate match of the season against Auburn.

By 2015 the Ramettes’ improvement was such that it competed in the Division One Grand Final against Gosford – only to lose by 3 points, an experience Kate describes as “shattering”.

Kate won the goalkicking award in that initial season with a whopping 6 goals! Since then she has played principally in the forward line, which she prefers (favourite position forward pocket) and the goals have come consistently as a result. She is the second Ramette to achieve 100 career goals, after Jessie Hickman (nee Burnham). She also holds the record for most goals by a Ramette in a game (7), achieved last season against Camden. 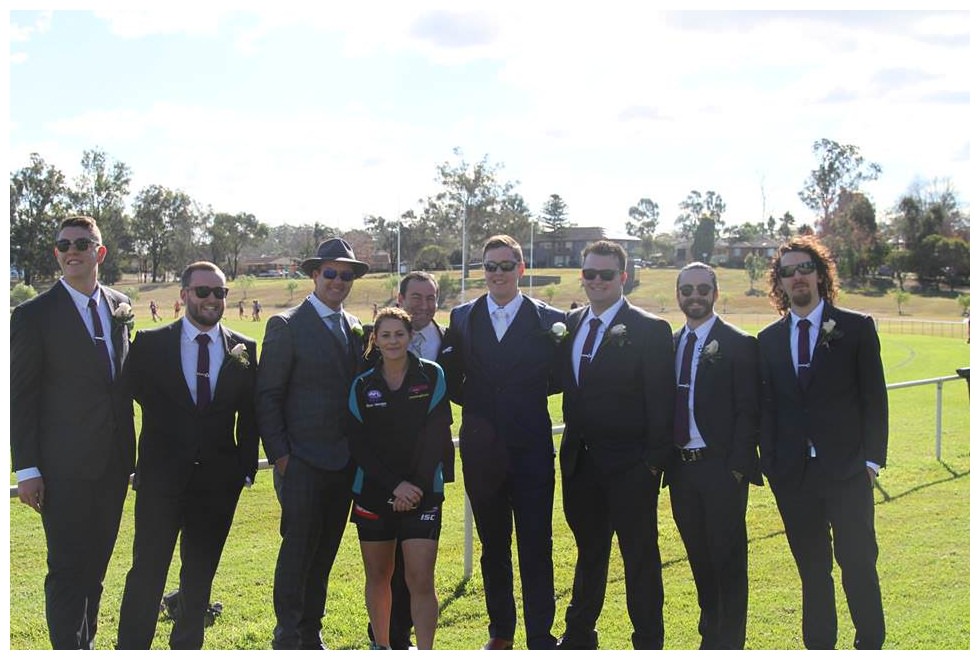 Along the journey Kate has experienced her share of injuries, the worst being to her eye after a contact lens mishap. She was out for 8 weeks and can no longer see outside the periphery of her left eye, which in her words “makes footy interesting at times”.

Her love for the game is “because it is much more than the Sherrin. It’s all the passion and the mateship of the club and being involved in something that is bigger than yourself.” Because of this, unsurprisingly, she hopes to play for as long as she can. And her commitment to the club isn’t limited to playing, she is also very active with her off-field work as well.

Highlights?
* ”Making the 2015 Grand Final.”
* ”Seeing the boys rock up in suits for my 100th game, that was really supportive and a great show of club spirit!”
* ”Being the first Ramette to hit 100 games - I felt such a bond with the club and all of the wonderful people along the way that have made footy such an enjoyable experience.”

Hardest Opponents?
* “Always my awesome and current teams mates from Auburn and of course I love getting a win against Blacktown!” 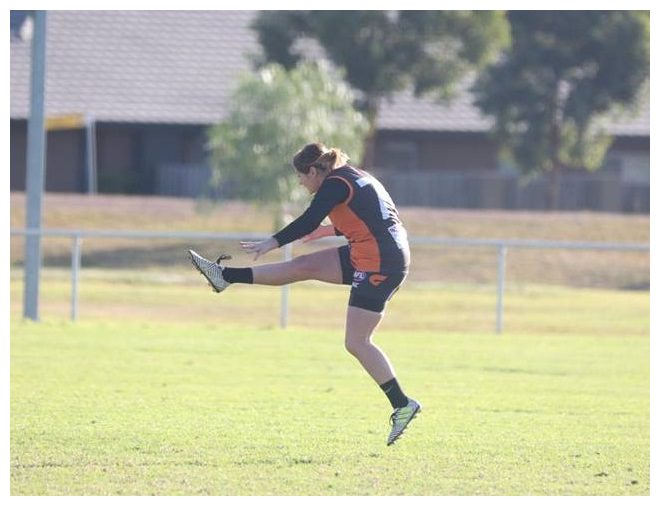 People To Thank?
* “Greg for all of his tireless efforts for womens’ footy”
* “All my coaches - Rixy, Jabba, Wayne, Ivonka and Billie (with special mention to Jabba for all of the countless hours spent improving my skills!)”
* “Kev for all of his guidance when I was seeking it.”
* “All of my team mates who I have played with over the years, which has led to many being my best friends and the greatest people I know - Eve, Burch, Killer, April, Juzzy, Jen, Rach, Ains, Skye, Jac and Jamie, Tonks, Cookie, Georgie, Tots, Nat, Brae, Kenny, Megs ... the list is endless!”
* “The leadership of Jen and Nat - playing with them was just amazing and they are simply inspirational.”

Congratulations Kate from all at the Penrith Rams on a wonderful achievement and career! 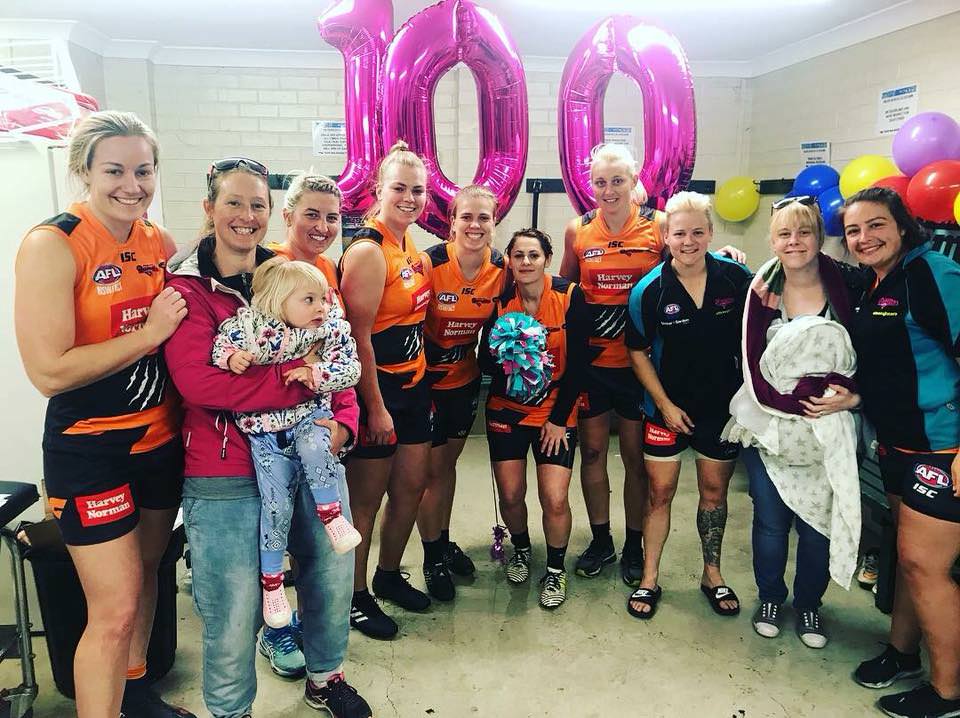