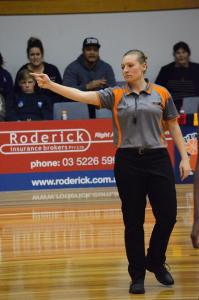 Micayla again had an exceptional week in Geelong and represented the ACT with the utmost professionalism both on and off the court. The week was a tough one for Micayla that consisted of a number of late nights and early mornings which was not only taxing on the body but also the mind.

“Nationals was a great week in which I was tested as an official by refereeing games of an extremely high quality.” were Micayla’s comments on the week “I was fortunate enough to be in a crew with very talented peers and so was able to learn from them as the week progressed. As a result of my week I was given the men's 5/6 game.”

After a solid week of refereeing, Micayla was rewarded with arguably the game of the week when she was appointed to a Women's Semi Final. The South Australia Metro and Victoria Metro battle came right down to the wire with a last second shot missing that would have sent the match into overtime.

Micayla has returned home now and looks forward to working with our budding elite referees on the weekends and bringing her experience and new knowledge to the association.

We congratulate Micayla on a successful week and look forward to watching her progress through the ranks of the referees.