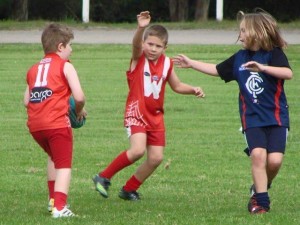 Q1, What position do you like to play and why?

I like to play Centre Half Back or Centre, because you get more involved in the game and I feel like I can influence the game.  I also like the contact of these positions

Q2, How many years have you been playing for?

I started playing AFL  when I was 4 years old.  I have played every year since this time except for 1 year I had when I went to try Rugby League

Q3, List all AFL programs you have been involved in through 2015 (school, reps, teams, swas, etc)

I Have played AFL for the Redbacks Under 13's team, I have also played in St Greg's Under 14's team that made it to Semi Finals, I was also involved in the WSJ Under 12 Development Squad and I am now part of the South West Sydney Academy of Sport for the next year.

Q4, What was your team highlight for season 2015 at the Redbacks (explain in detail)

Winning our first game of the season and being able to sing our Team Song for our new coach, and also our camping trip at the end of this season where we got to relax and have fun as friends not only team mates.

Q5, What was your individual highlight for year 2015 (can be from any of the programs you have been involved in (explain in detail)

As I have played in the backs for the last couple of years it was a highlight for me to score 2 goals in a game against "Power"  It was such a buzz to be able to do this for a change.

Q6, What do you like about playing AFL at the Redbacks?

Redbacks are like my second family.  I have played AFL with many of the boys fr a long time and I love getting out there on the field and playing the sport I love wearing the Red and White.

Jed was one of those players that just went hard at it. Whenever he was around his teammates knew they were safe as Jed would protect them. He loves the contest. In saying that, Jed has a profound way of reading the play as well and positions himself well behind the ball. Many a times he was the person winning us a ball back off the opposition. His skills have come along in leaps and bounds this year and that is a result of the hard work and dedication he puts in, It's going to be very interesting to see Jed progress through the coming years in AFL. 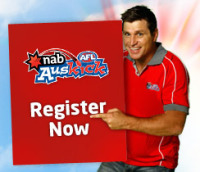