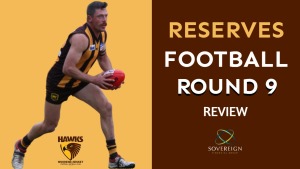 Thoughts on the result on the weekend
We knew coming into the game that Wallan has been the benchmark of the 2nds competition for the past few years. They score regularly and aggressively, so stopping the supply into the forward line from the middle was our main focus. We really put it on the boys to bring the pressure all over the ground and stick to our game plan for four quarters. The boys really gave it everything and the result went our way which has really built more belief within our group.

Key moment that stood out for you during the game
A key moment from the game came late in the last quarter. We were up by five-points and Wallan were pressing hard through the middle towards goal and Purcell scrapped against two Wallan opponents at half-back and got the ball going our way. This meant our mids had a chance to rebound and hit Ambler on the lead, 30m out to secure the game.

Key players that stood out and why
It was a massive team effort, every player had a moment throughout the game that really benefited the team. L.Bourke was huge down back all day without losing a contest and really repealing us forward with every kick he had. Bullard had a job in the midfield and managed to keep his opponent to three kicks for the day which really meant we had the upper hand around the stoppages. M.Miranda just kept running and his tackle pressure set the standard for the day which was huge.

What are you looking for the group to improve on
As a group, we just really need to stick together and keep training hard. We have a game plan/style that we are putting in place and we can now start to see the rewards. There are guys missing out each week, but performing well in the 3rds so the depth is really strong. Touch wood, we have been lucky with injuries so far and have some real quality to come back into the side.

Thoughts ahead of this weekend's match
Macedon at Macedon is a massive game and never an easy task. They might be down on form recently but they still have some really good names running through their 2nds which we always respect. We know we will have some changes but I back the boys coming in to fill the roles and hopefully we can keep our momentum going.