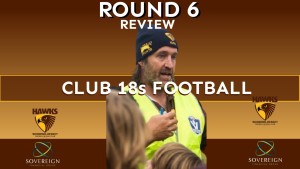 - Thoughts on the result on the weekend
I was extremely happy with the result from Friday night’s game against the Sunbury Kanga’s, especially after a bad result the week before against Caroline Springs. It was really good to have learned from the conditions from the week before and implement that for the game against the Kanga’s, in the context of our season we really needed that win to keep in touch. With such an even competition, every win is vital!

- Key moment that stood out for you in the game
it would have been more like a key period instead of a moment, to hold them out for the last 10 minutes of the quarter after we hit the front was such a gallant effort by all of our boys, with such a draining contest with the conditions the way they were, to fight the game out to the end was brilliant by our team!

- Key players that impressed and why
Matty ‘Chucka’ Bourke was absolutely immense for us, he was playing dry weather footy while the rest of us were battling with the wet conditions. He was everywhere all night and won all of the contests. Robbie McCoy was cool and calm under pressure and was a great voice on the field.

- What are you looking for the group to improve on
Just really want to concentrate on our consistency, which is hard with so many changes from week to week due to players' work and family commitments.

But I would hope to see our structure improve week in week out, as this will be our key moving forward, and what good sides have is structure that no matter who is playing they know where to be and what to do.

- Thoughts ahead of this weekend's match
This week will be another tough assignment against the Western Rams. There isn’t any easy games in this comp,

The last time we played them we got the win, but it was a hard-fought contest for the most part of that game, and also depends on how many players we have available and also how many the Rams have also.

I'm really looking forward to the challenge ahead and hoping we can chalk up another home win. Just great to be back playing footy after the lockdowns, and absolutely appreciate the RDFNL  for providing this competition, is a great way to keep so many more people involved with Football and with their local clubs.

Woodend/Hesket play host to the Western Rams on Friday, July 9 from 7.30pm