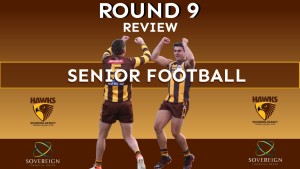 Thoughts on the result on the weekend
- It was another disappointing result in that we didn’t get four points. We have played really well over the last two weeks against the two top teams. We just haven’t quite been able to go with them for the full four quarters. We haven’t had much luck with multiple key players missing the last 2 games.

Key moment for you in the game
- The turning point in the game was the last quarter where Wallan’s class just shown through. We were able to withstand the pressure for three quarters and had chances but losing three players throughout the game took its toll late.

Key players that impressed you and why
- Jimmy Hepburn, Tobi Duff-Tytler and Brandon Wilson took the big jobs of Perri, Grindlay and Fowler and all played very well. Tobi was probably BOG. Gawthrop has been in good form at CHB and Vistarini, Franzi and Trent Laverie all competed hard through the middle of the ground. Tom Wilson gave us a good option all day up forward.

Improvements that you're looking from in the group
- Continually looking for the group to improve in all areas and we are trying to build a new team and culture at the club. Our skills and connection with our forwards have been the one thing holding us back all season so we hope to rectify that.

Thoughts ahead of this weekend's match
- Macedon at Tony Clarke is a very tough task and I’m sure they will be smarting from the defeat earlier in the year to us. We will have to be ready for a four-quarter battle again, gain ascendancy through the midfield and make sure we take some chances in front of goal.