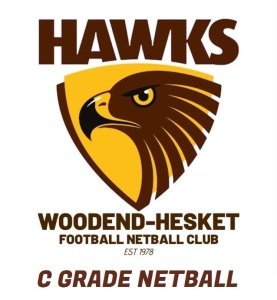 The C grade team finished off the season in style beating Wallan 30-27 and finishing with nine wins for the season. Unfortunately it wasn’t enough to get the team into the finals as both Wallan and Broadford who finished on the same points as Woodend had higher percentages.
The team should be really proud of their effort, beating Wallan on both occasions over the season. The first and second quarters set up the win, with the team playing consistently well, maintaining intensity and applying pressure across the court. Wallan lifted their game after half time but the team kept their cool under pressure and came away with the win.
Every player performed their role, all working together to get the win. The team was positive, encouraging eachother on and off the court. Alex and Jazz worked really well together in goals, Jazz moving around in the circle to create the space for Alex to hold under the ring. Often Wallan double teamed Alex and Jazz was the perfect decoy. The goalers have performed consistently well over the season.
Paige and Courtney shared the WA position, feeding the ball really well into the goalers. Courtney’s feeds were excellent and Paige used her speed to create another attacking option. Paige also played in C and WD and had a terrific game.
Chloe was the perfect linking player in centre, driving down the court, calmly feeding the ball into the goalers and encouraging the defenders. Kyra played a consistent game in WD, negating her WA and providing excellent back up as the team brought the ball down the court into our attack end. Sarah played her usual courageous game, taking a spill and a few knocks from her GA didn’t seem to stop her, in fact it made her more determined!
Sarah’s defensive efforts were terrific, gaining tips and intercepts and applying pressure on her player. Mon played a super game, time and time again she intercepted the ball in Wallan’s goal circle and got her hands on numerous rebounds. Mon has been rock solid in GK all year.
We were sorry not to have Lou and Hannah for our last game who have also been great contributors across the season.
Whilst we didn’t make the finals in the end, the team should be super proud of their season. They have been a pleasure to coach and we have had alot of fun across the year. Our highlight being the amazing one goal win against Rupo. Thanks everyone for such a great season, here’s to more success next year. Go Hawks!