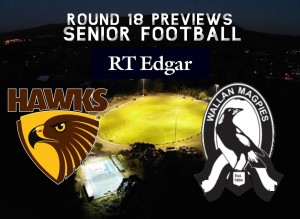 Talking Point
Woodend/Hesket - can it send outgoing coach Tom Carland out on a high? Tom has done so much for the club behind the scenes, it has been an incredible effort and he has been so important for the day-to-day running of the club with his relentless hard-work and commitment. The club will miss him but be happy to have worked with him.
Wallan - can it recover from last week's loss to Riddell and build some solid momentum heading into finals? Riddell has beaten them twice this season and there is a good chance that the pair will meet in an Elimination final next week.
Last Meeting
The Pies celebrated a 58-point win at home in Round Seven on the back of eight goals to three in the third term. Matt Perri and Josh Barber shared nine goals between them while Crosswell and Dan Toman were the best for the Hawks.
Current Form
Woodend/Hesket - it has tasted victory in one of the last four games. It has been in the contest for at least the first half in those losses.
Wallan - it has split its results in the last month with two big losses to the two sides directly above it on the ladder. It is 2-5 against top six teams this year. It needs to change that next week for the better if its going to win the flag.
Why they will win
Woodend/Hesket - there is a lot of pride at stake and its form hasn't been that bad. It pushed Romsey and Diggers Rest in first halves in recent weeks and it can build on that and restrict its opponents with at least a three-quarter performance.
Wallan - it has outstanding goal kicking power in Matt Perri and the class of Ricky Schraven in the midfield, what isn't to love?
Who will win
Wallan will be too strong and win this in the second half.
Impact of this game
Wallan can move as high as fourth. If Romsey beat Riddell, Wallan's percentage (48 - points 273%) will be greater than Riddell (52 points - 249%). If Romsey win, Wallan stays in fifth and plays Rupertswood next week. Riddell has been a big stumbling block this year, so Wallan fans may hope for a Riddell victory so that it can play Rupertswood next week, a team that it has already beaten.