ROUND 18 PREVIEW | A Grade Netball 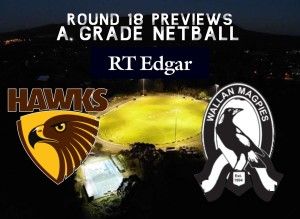 Talking point
Woodend/Hesket - With a full A grade team for the first time in many weeks, Woodend-Hesket is set to play a strong team driven game against Wallan. All players committed to second efforts to assist in attacking and defence.

Previous round
Woodend-Hesket: Woodend’s game against Diggers Rest is always a good clean game. Diggers played an athletic, well timed attacking game with high number of goals from all areas in the ring. In defence, being a tall team in all positions, they also visually shut down the space for leads and passes. The Hawks had success at times, however, Diggers Rest took the win due to their across the board strengths.
Wallan: Wallan played Riddell and had a clear win.

Why are they going to win
Woodend-Hesket: Having played Diggers Rest that have a similar style of game, tall, athletic, with well timed leads, placement of passes and technical clean defenders, to Wallan, Woodend will settle into this week’s game a lot quicker.

To stay in the game, Woodend will need to lift their work effort and play smart, not the long aerial game that will play into Wallan’s hands and make them look good and increase their confidence and decrease Woodend’s confidence.
Wallan:
Wallan is sitting third leading into this game. They will be working on fine tuning their game structure, decreasing errors to assist them in their finals journey.

Who is going to win?
This will be a clean game by both sides. Woodend-Hesket will be focusing on playing their best for their final game of the season and also their final home game in front of their supporters; families, friends and club members.  Wallan will take this game due to their strong skill set.