ROUND 17 REVIEWS | A Grade Netball 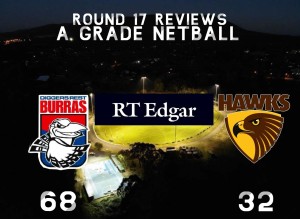 With a wild night leading into an even more challenging winters day, Woodend A grade team travelled to Diggers Rest for round 17.
The Diggers Rest team were quite a tall, athletic side, playing the ball,  with great timing of leads, well placed passes and high scoring of goals.
This was a clean game by both sides and for Woodend, this game helped the players prepare for Wallan who play a very similar style of game for the final round of the 2019 season next week.
With Tara Burnip returning to court after a period of absence, her performance was strong. Leads and placement of passes were successful, yes there were errors, however she got in the ring and did score goals. Maddy Staresina has returned to form, no matter what position she played, she was always presenting through the mid court and was the dominating scorer of the day.
In the mid court Gracie Reid with her wonderful speed, worked extremely hard to outplay the Diggers Rest midcourt players who due to their height, speed was able to decrease the available space for leads and passes.
However, Gracie has worked hard throughout the season and was a solid performer.
Brittany Bowen also worked hard linking the back line into the attacking end, turning her defensive play into attack. Shannon Kirkpatrick and Macca Brown shared the WD position, tagging the WA.
Both these players had success in repositioning this player and preventing her from receiving passes at times.
Abbey Glassey and Ally Watkins had a very busy game with opponents who matched them in height and speed. Even though the Diggers Rest shooters had success with clever well placed passes to each other inside the shooting circle, Abbey and Ally need to be recognised for their ability to keep trying, even if decisions didn’t go their way. Diggers Rest took this win due to their structured game play.
The Woodend A grade team are a group of players with wonderful natural talent. They have worked hard throughout the season and have developed greater understanding of each other’s strengths and have incorporated this knowledge into their team play.
This team just need to keep working on knowing what their structure game play is and playing it.
Well done ladies, a good game, a foundation to build on for next week’s game. You are all talented players and your knowledge of the game is greater than you think. Go Hawks