ROUND 17 PREVIEWS | A Grade Netball 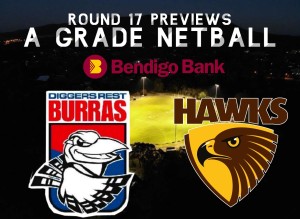 Talking point: With the A grade team working on their short, fast attacking game over the last four games and with Tara Burnip returning to court this round, while Maddy Staresina has also peaking with goals being scored, Woodend has now the complete lineup of speed and height in the attacking end. Woodend’s centre court and defensive lineup is a solid group of players who work as a strong unit.

Previous round:
Woodend-Hesket: They played Romsey with their performance improving both in the attacking end and tightening up in defence throughout the game. Romsey took the win, however, the young Hawks are moving the ball around, keeping possession due to all the players making second effort leads and options.
Diggers Rest: had a bye the previous round, however, the game two weeks ago was against Macedon, saw Macedon take the win by 28 goals

Why are they going to win:
Woodend-Hesket: With Tara Burnip included in the team and improvements made throughout the season, the Hawks will come out hard and fast.
Diggers Rest: coming off a bye and a loss to Macedon the previous week, Diggers Rest will be wanting this win to assist with their finals journey.

Who is good going to win:
Looking at the season results and the positions of both these teams on the 2019 ladder, Diggers Rest will go in as favourites, however Woodend’s depth in playing good netball each quarter and also lifting when required, makes this a tight game. Woodend-Hesket to come home with the win.