ROUND 16 REVIEWS | B Grade Netball 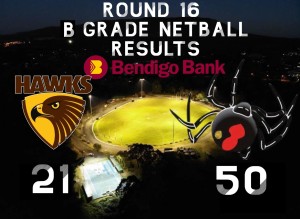 The Woodend/Hesket B grade team knew its game against Romsey was going to be challenging. With six A grade players making up the Romsey side, the Hawk players still had the desire to play well.

This game opened up as a clean, fast paced game. Emily and Rylee were kept busy with the athletic defenders. While Chelsea and Amy worked hard finding space to pass off to the shooters. Tegan’s WA was highly skilled with her step around pass which was always difficult to defend, Tegan stay focused trying to reposition her.

In the defensive circle, Bonnie and Taylor had the challenge to unsettle the Romsey’s shooters which did result in missed shots and rebounds.

Entering the second quarter, Romsey had developed their momentum and also identified how to outplay us, however we remained competitive for the entire game. Bonnie came into GA, this created more height in the shooting circle and Claire came into GK. Tegan went into WA, while Chelsea went into WD to play against the opening WA. These three positional changes did see an increase in defensive success, which resulted in goals being scored, while for Romsey errors also began to appear.

With improvement of overall performance played by Woodend, entering the third quarter Mel Wilson returned on court after a season long injury as GK. With her speed over a short distance, she was able to out position the GS, intercept and rebound missed shots. Rylee returned to court as GA and Bonnie went into GS and Chelsea and Tegan returned to their original positions due to Romsey also making changes.

These positional changes in the shooting circle and the strengthened defensive approach that all players applied saw an even further improvement of team performance. Woodend only lost that quarter by three goals.

Entering the final quarter and knowing that Romsey was sitting second in the B grade competition, we were still able to create pressure on their leads and passes. Emily returned to court as GS, with Rylee as GA. This combination of speed and height made it difficult for Romsey.

In the attacking end, Woodend/Hesket’s vision became quicker, the passes got faster and stronger. Taylor and Mel continued to work hard and Tegan back to tagging the WA. This was a successful quarter in relation to performance only loosing it by five.

For the B grade Woodend team their performance improved over the four quarters. All of the players contributed and persevered on concentrating on their immediate job. In relation to the physical strength of Romsey, this did not phase the players either.

Well done ladies, even though we lost the game, our tenacity was played as a team. Go Hawks!