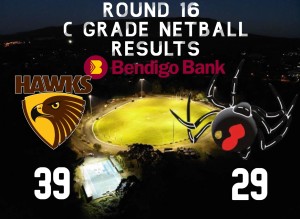 Woodend/Hesket followed up its big win against Lancefield with a 39-29 win against Romsey.

In a fairly even contest for three quarters, it wasn’t until the last quarter that the Hawks were able to press home their advantage and double the score of Romsey in the last quarter.

It was great to see the team play a patient game, focusing on implementing set plays, feeding the ball well into Louise in GS and having seven defenders across the court.

At times the team’s passing was not up to scratch, however, this was something that improved over the course of the game. At the start of the game we discussed the importance of doing the small things well – adjusting distance if called for obstruction, not breaking at centre passes, being ready all the time. Overall, the team did do the small things well.
Following on from her strong performance against Lancefield, Louise Marendaz was fantastic in GS, scoring 36 out of 39 goals. Lou held beautifully under the ring, created space when she needed to, pulled in re-bounds and encouraged her team mates. Monique Dean had a great game in GK, making her opponent work really hard for every goal and taking a number of intercepts deep in Romsey’s attack end. Sarah Smith worked really well with Mon in defence, applying pressure to her opponent and helping to bring the ball down the court.
The win sees C grade sitting in sixth position by percentage, with Broadford breathing down our necks as they beat Melton Centrals in an upset.

The team will need to cause an upset against Diggers this weekend and then beat Wallan in the final round to play in the finals as both Wallan and Broadford have winnable games this weekend. We can only control the games we play in and with a positive attitude and determined approach, anything is possible. Go Hawks!