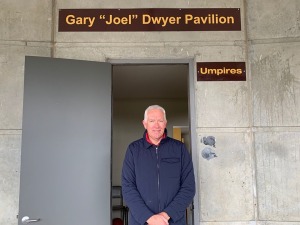 Joel has been involved with the Woodend Junior Football Netball Club, the RDFNL, Interleague, Calder Cannons and Auskick for many years.

Joel has been the Woodend Auskick Coordinator and Facilitator for an astonishing 18 years from 2001 - 2018, a member of the Woodend Junior Football Netball Club Committee and has been the recipient of the highly coveted WJFNC Fred Smith Award on two occasions.

Joel has also been involved in recruiting RDFNL Interleague Coaches and for the past 15 years, has talent scouted at Interleague games for the recruitment of players for Calder Cannons and became a Life Member of the Calder Cannons 2003.

Joel remains involved in football and netball in the local community, being a regular at many of the games and has also recently become involved in the All Abilities football that has formed locally.

The Woodend Junior Football Netball Club and the broader Woodend community thank you Joel, for your enduring commitment to the youth of our community and are very pleased to see you recognised in this way. You have and will always be a special part of the fabric of our football netball community. Go Hawks!!