ROUND 15 REVIEWS | A Grade Netball 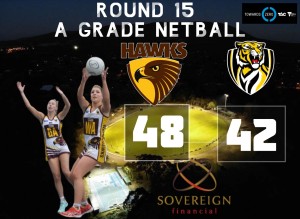 Having won the opening game of the 2019 season against Lancefield, it was game time at the GG oval for the A grade team.

We knew this was going to be a good game and a game that Woodend would have to earn. Positioning players in the first quarter was paramount to set the standard of play.

This analysis of Lancefield’s player’s strength and also an honest appraisal of Woodend’s players skill set began before game day and continued on throughout each quarter.

The opening lineup saw Ally Watkins take on the GS position with Maddy Staresina. Gracie, Macca and Shannon settled into the centre court positions of WA,C and WD. While in the backline Shae and Abbey had the job to prevent Lancefield’s left handed 6ft 2inch GS and their dominating GA from scoring goals and getting momentum.

This lineup was effective. The game was steady, with interceptions being made and scores on the board by both teams.

Going into the second quarter Woodend up by one goal, planned positional changes were made. Ally was redeployed back into GK. Being slightly taller saw Ally tip away many passes and slowly wear down the confidence of the attacking play that Lancefield was trying to achieve.

Fresh legs were brought on into the centre court with Brittany taking the WA position and Maddy took the GS position.

This was beneficial as Maddy’s speed over a short distance was effective in the shooting circle. Also after having twelve months out of the A grade team due to her ACL rehabilitation program, Sarah Duff made her debut for the 2019 season as GA.

Having played Maddy and Sarah in the ring during the previous season, we knew it would work with their speed and experience. Macca, Shannon and Shae continued to tag their players and in return, attacked down court . At half time, with thirteen goals a piece in that quarter, Woodend was up by one.

With work to be done, and not settling, calculated changes were made going into the third quarter. Having Abbey off the second quarter she was able to see what the Lancefield shooters were doing.

Abbey picked up the GD position. Shae had ran the GA for two quarters, now it was time for Abbey to continue the job. Instructions were to tag her outside the ring, do the hard work outside the ring and stop her from getting into the ring, as the Lancefield GA placement of passes was a major issue.

In this quarter, the rewards of Abbey’s defence was not seen until the final quarter where with the tagging and great arms over the pass, saw the errors appear and Woodend starting score goals from them.

Gracie came into the centre position, with fresh legs was successful in the attacking end, however, the Lancefield centre contributed too much in their attacking end.

Macca returning to the centre within this quarter and our defence though the mid court strengthened, however, Lancefield won the quarter by three.

With Woodend entering the final quarter being two goals down, it was show time. The attacking end knew that working the ball around with second leads and well placed passes was working. The team needed to be patient and score the goals but they also needed to lift physically and mentally.

The A grade team knew that their defence collectively was imperative all over the court and to the be vocal. All the previous games throughout the season had taught the players how they were defeated and also how they won their games.

They were a winning team and it was time to finish it off and so they did. Shannon and Abbey were there on the transverse line to reset the play when in the attacking end a pass was not possible. When errors were made by Lancefield, Ally and Abbey picked up the ball and moved it along. In the shooting circle, Maddy and Sarah passed off even closer to the post.

With Macca and Brittany re offering onto the circle and also off the circle at the same time, Lancefield struggled to keep up.

Final score, 48-42, with an eight goals turn around the A grade Woodend team won, taking home this hard earned win to the club .

Well done ladies, we now know we can back up a previous win with another win. Another lesson learnt and a belief you are a good team.

Concentrating on your immediate job builds confidence, commitment to training and playing how you need to play against your opponent and playing how the team needs you to play contributes to a team win. Well done ladies. Go Hawks!