ROUND 14 REVIEWS | A Grade Netball 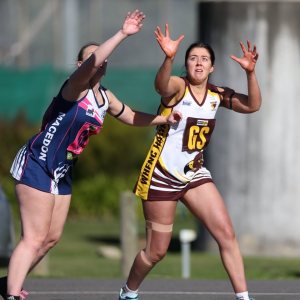 Round 14 away game had Woodend/Hesket come face-to-face with Macedon.

Having played this team in previous rounds and seasons, positioning the more experienced A Grade team players in the opening quarter allowed the Hawks to handle the physical and visual pressure Macedon played.

These two players over previous seasons have evolved and have developed a determination and acquired skills that sits squarely on their shoulders to stay present, keep accessing their opponent and defend accordingly.

Through the mid-court, playing the Hawks couldn't play its long game due to Macedon’s style of defence which was off the player.

The purpose was to shut down space and go hunting for the ball. With short leads, second effect leads and passing off immediately, the Hawks worked the ball down court.

At times the good work was rewarded and goals were scored. What was obviously clear was that the Woodend/Hesket team were no longer intimidated by Macedon. This a huge step forward that has taken many seasons to disperse.

Ally Watkins needs to be acknowledged. As vice captain, she took up the GS position to benefit the team and played against highly skilled defenders.

Maddy Staresina and Emma Cogger also tried to play their game, however, the leads they created were easy to read by the opposition. Speed on the lead, multiple leads and speed on the pass every time is required by all seven players all the time. Any hesitation with the lead and pass breaks possession of the ball.

Throughout the game, all mid-court players were played. Macca and Brittany were effective in centre and WA. Shannon and Gracie shared the WD position while trying to minimise Macedon WA’s contribution in the attacking end.

For Abbey and Shae, they continued to work hard and did an outstanding job after playing in the Under 19 game earlier in the day.

Shae retired from the game during the third quarter and Shannon picked up the GD position.

Even though the team lost height in the circle, Shannon’s ground speed kept up with the GA.

Woodend/Hesket's game was a good and steady, however, its error rate did increase throughout the game and this was due to players not trying a different approach when in possession of the ball and repeating the same errors are always detrimental to a team.

Even though Macedon took the win, this game has indirectly assisted us in preparation for the game against Lancefield next round. Go Hawks