ROUND 14 PREVIEWS | A Grade Netball 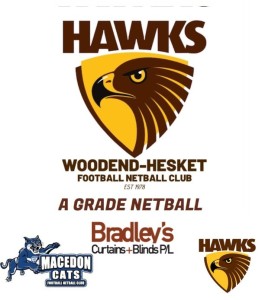 Talking point
With two games played without Tara Burnip, the A grade team know they enjoy a tall, athletic shooter.  Ally Watkins has had a strong season in defence and has taken on this position. Shae Denahy and Abbey Glassey will be charged with the Macedon shooters in defence.

Previous round
Macedon - it won by only four-goals against Riddell off the back of a bye. This team appear to have some issues with their connections into goals at the moment but will learn from this game and should bounce back with force.

Woodend-Hesket - with a disappointing first quarter against Melton Central, it knows it has to transition onto the court with more physical presence and a stronger mindset to play its individual game at a higher standard which will create an even stronger overall team performance.

Why are they going to win
Macedon - it is sitting second on the ladder, working towards fine tuning its performance for finals and ultimately a grand final.

Woodend-Hesket - it is proudly sitting seventh on the ladder, this team will be working hard to improve their performance which will assist them during the last four rounds and remain seventh at the end of the season.

Who is going to win
Macedon will take the win on the board, while Woodend/Hesket will work to be as competitive as possible and celebrate when set plays are achieved and goals are scored.