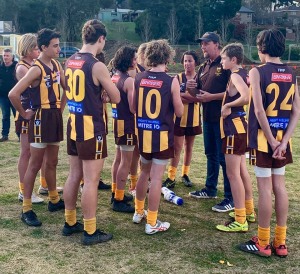 11 red footy team, led by Jeremy (Jezza) Pennefather is sitting undefeated on top of the ladder and are assured of playing finals. After a Premiership in 2018, this team may just go back to back if their form continues.

11 yellow footy team, led by Justin Shiner, is sitting 7th on the ladder, but only one game out of the top four. The ladder is tight with four teams vying for the 4th position on the ladder and a spot in finals. Our Hawks have a good run home so they are a big chance of finals if results fall our way.

11 green footy team, led by Jerome Smith is sitting 6th on the ladder, currently one game out of the top four. With a mixed run home, they will need a couple of upsets to get a finals berth, it is doable, so go young hawks!

13B footy team, led by Tony Hanegraaf, is sitting 3rd on the ladder and with a good run home against lower placed Rupo and a bye, look to be in a great position to cement their spot in finals! A massive effort from this group after sitting bottom of the ladder at the end of round 7 - an enormous second half of the season!

15B footy team, led by Anthony (Woody) Woodcock & Matt Shanahan, is sitting comfortably in 4th position on the ladder and with a good run home they look to be assured of a finals campaign. Their best is very good and will have the top teams worried if they have their full team in come finals.

NETBALL
11/u Div 1 netball, led by Briony Duff-Tytler, are sitting 5th on the ladder and although they have had good wins, they do have a tough run home, playing ladder leaders Rupo this coming week, whilst the 4th placed team has a good run home. They look to miss finals but have had a great season for such a very young team. Look out for these players once they are top age in this division!

13/u Div 1 netball, led by Kellie Duff, are sitting 7th on the ladder after a difficult season of player unavailability most weeks. They have made great improvements and although their best is fantastic they just haven't had the opportunity to be consistent and will miss out on finals. A great group that have held their heads high all season.

15/u Div 1 netball, led by Kellie Duff, are sitting 3rd on the ladder after a much improved 2nd half of the season. However, there are 4 teams still in the hunt for the 3rd and 4th positions on the ladder at the seasons end, separated by only 2 points. The results from the remaining games will decide the finals contenders, especially this week as we go up against Rupo who we drew against in Rd 1.

17/u Div 1 netball, led by Kellie Duff, are sitting undefeated 10 points clear on top of the ladder. After such a dominant season, this talented team is assured of a finals campaign and will be hard to beat.

GIRLS FOOTBALL
u/13 Girls footy team, led by Anthony (Woody) Woodcock, are sitting 5th on the ladder. Although they won't make finals, the skills being learnt and the development shown in their first ever season is encouraging and a credit to the players and Woody.

u/18 Girls footy team, led by Russell Bourke, are sitting 4th on the ladder and look to be assured of making finals. This has been an outstanding season for this group of players in their first year of girls footy for our club!

Well done to all of our Hawks teams, every player does us super proud each and every week, regardless of the results!! Got to love junior sport!
Good luck to all teams for the remainder of the season!