Round 11 Reviews | A Grade Netball 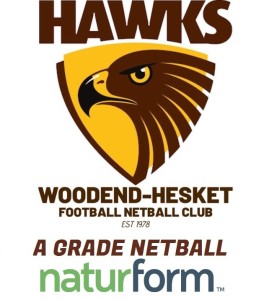 Round eleven of the 2019 season had Woodend/Hesket's A Grade team very pleased that its game was held in the Ruperswood stadium as winter really did appear with continual rain and strong wins outside.

This game was always going to be tough and the top of the table undefeated Rupo proved that, taking out the win 18-61.

With Tara leaving Australia for a holiday as the first whistle began the game, Emma Cogger was given the opportunity to be the starting GS, with Maddy, Gracie and Brittany supporting her and with clear instructions to play a forward attacking game.

In defence, Shannon, Abbey and Ally went to work to prevent Rupo from getting momentum in their attacking end.

The opening quarter did see the requested style of play in attack, with Gracie and Brittany making forward plays onto the ball and re-offering with second leads.

While in defence success was being seen with tips, interception and errors in passing due to our defenders applying pressure. Ally, Abbey and Shannon worked hard tagging and forcing Rupo attackers out of their dominate leads.

However, Rupo played their high mid-court press in our shooting third that closed down space for our attackers to run into. This indirectly caused the Hawks to be unsure where to run which caused confusion.

This press was mainly strong due to the Rupo players being taller and athletic and our errors were either held balls or we took to playing our long game which resulted in Rupo intercepting the ball.

The court rotation agreement that the leadership team implemented this year was put into action in the second half of the game. With a win not possible against Rupo, new combinations were tried. It gave us an opportunity for our A graders to play in their second and third position and there was success, which is great reference for future games.

The Hawks knew this game was going to be hard. The overall game plan was to celebrate the internal wins, good passages of play, interceptions and placement of passes.

All players that lined up in the A grade team, did not give up. The same errors did occur however honest conversation was held among players. Abbey and Ally and also Alex worked hard defending in the circle, while our centre court players, Shannon, Macca, Brittany and Gracie tried really hard to create space for leads and passes.  Maddy and Emma also tried to learn about each other’s style of game in addition to having very tall and athletic defenders against them.

What is wonderful about the Woodend A Grade team is that they are welcoming to all players from other grades that come to play in the team and they work hard on and off the court to assist anyway possible.

With this loss, many elements about our game, good and bad was highlighted  and I know the players will learn from them to assist in playing better in our next game.  Go Hawks