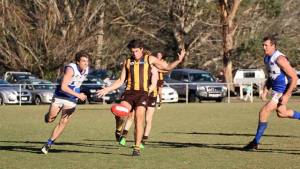 A 2011 Under 18 Premiership player, Govey made his Senior debut in 2012 as a 17-year-old and has been a regular fixture in the team since.

He is the son of the late Peter Gove who the club has it's Under 19 Best & Fairest named after, and of course one of the club's most vocal and passionate supporters (and new Nana) Julie.

The Woodend/Hesket Football Netball Club wish to congratulate him on reaching the milestone.