ROUND EIGHT Previews | Under 19.5s Football 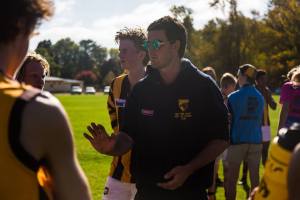 | Chris Yeend |
Under 19.5s Football previews thanks to Woodend Dental.
Talking Points
Woodend/Hesket - It missed a golden opportunity to remain undefeated last week, facing a team that had yet to win a game in 2019. It trailed for the entire contest, does it have the motivation and drive in the midfield to bounce back?
Riddell - It was taken down pretty comfortably by the undefeated reigning premiers, Rupertswood. It had a chance to also go undefeated to start the season but it was up against the best team in the competition and the 41-point margin is probably a fare reflection of where Rupertswood as a group rather than Riddell.

Form
Woodend/Hesket - Went undefeated up until last weekend against Wallan. Statistically the equal-second best in defense for the year and is looking to secure a place in the top two as the season progresses. Riley Vernon sparked to life with two-goals on the weekend and is loaded with all-round athletic potential since crossing from Gisborne.
Riddell - Should be happy with its start to the season with four wins from five games. Taylor Ford and Oscar Besanko are terrific performers and continue to impress each week. Great invaluable depth across its best 18 that has contributed to its fine start.

Why they will win
Woodend/Hesket - Looking long-term, it needs to. It faces Rupertswood just once more on the run home for the rest of the season, and assuming that team remains undefeated, a win here could seal up second spot now based on form. It had a disappointing effort last week against the Pies and a bounce back to form is necessary.
Riddell - With two games against Rupertswood on the home stretch, a win here is important as ideal preparation for those matches. It has a tough draw with the Sharks again next week, so a win here will give it plenty of added confidence heading into next week.

Who will win
It is frightening how close these teams were with its matches last week. Same scoring shots in the first two quarters (zero and two), the opposition both kicked 4.5 in the first half, and had the same scores at three-quarter time (2.2). Woodend/Hesket at home has a lot more overall talent in its list with Burnip, Fox and O'Sullivan, and will be able to run over the top of the Bombers in the second half.