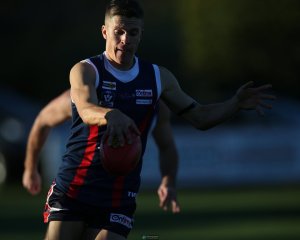 Last week
If the Hawks had a chance to claw its way back into the 2019 season, it needed to take down the Cats at its first home game of the season under lights. After a solid first half where they trailed by 12-points, the home side conceded 5.3 to nothing in the third term to trail by 45-points heading into the final term. The margin was too great as the Cats celebrated a 54-point win, 14.15.99 to 7.3.45.

The Cats missed a host of premiership stars including Jason Cooke, Dan Markworth and Al Collins.

This week
It's a big mountain to climb for the Brown and Gold who sit in eighth position and have a big percentage gap between them and seventh placed Macedon (56-percent).

Diggers Rest has yet to drop a game this season but were pushed all the way in relatively slippery conditions against Melton Centrals in a 32-point win. The result perhaps suited Centrals more considering that star forward Dylan Weir missed through suspension.

Col 'Lefty' Laurie impressed with four-goals while Cale Morton was back to his best.

The pair met once last year where Woodend/Hesket stunned the world with an 11-point win over the more highly fancied Diggers Rest line-up. This result is still being talked about between the pair, today.
Diggers Rest responded from the loss with a 195-point win over Rockbank the following week.

This is going to be a tough challenge for the Hawks, but at the same time, not impossible. They need to draw on that confidence it had from last year and produce a similar performance. The loss of Ben 'Bunna' Toman for the rest of the season due to travel does hurt the midfield but it provides a platform for someone else to step up.

Diggers Rest doesn't necessarily have a strong break-out forward, so it gives opportunities for the Hawk back-line to do their role and play tight. The midfield will be an interesting contest and will dictate how this game unfolds.

The season is on the line for the home team and if it can play at its best, it can cause an upset in this game.