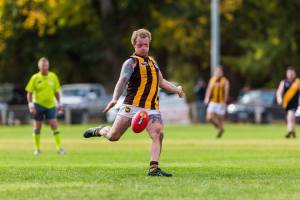 Last week
Nothing beats getting a big win over the old enemy, Macedon. The Hawks kicked away to a 39-point lead at half-time, held off the Cats' comeback in the third stanza before putting through 9.1 to nothing in the final term to set up an 85-point win, 17.8.110 to 4.1.25.

Coach Liam 'Burgs' O'Meara sent home eight-goals, Matt 'Chucka' Bourke was best on ground alongside Jimmy Jettle and Jesse Waters. It was an important win for the team who are still building a solid foundation for the 2019 season.

This week
The Hawks take on the all-mighty Burra outfit who is fresh off an impressive win over Melton Centrals. The pair met once in 2018 where the Burra celebrated a hard-fought 14-point win. Aside from Wallan (wins in Round 14 and second-semi), no other team had got as close to them all season as it went on to win the premiership.
Diggers Rest had some solid contributors in its 38-point win over Centrals. Ryan Peters impressed with three goals, and Dylan Hannan and Shaun Sims were outstanding. Brandon 'BJ' Kilty was outstanding as strives to make his return to the Senior team.

The Hawks go into this game with some strong confidence. It is undefeated this year and take on a team that yet again stumbled to Wallan earlier in the season. If they can get the run through the midfield, and Nicholls and O'Meara can great opportunities, they will be in with a real chance. The potential match-up of Senior and Reserves premiership player Brett Caton on O'Meara will be mouth-watering and will determine on whether the Hawks can go the distance and knock over the reigning champs.