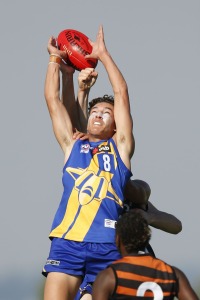 This week the boys are flying to Tasmania to compete against the Devils of the south. Tasi has won it's past two matches and have proven to be no pushover. However, the Jets have their academy players returning from state league duties and will show an impressive line-up. Spencer Johnson has returned from injury, but Emerson Jekka was injured playing in the All-Australian academy match and will miss this week.

Matt McGinniss v Archie Manton
McGuinness is Tasmania's defensive weapon down back. Intercept Marking and elite kicking skills on both feet is the feature of this Devils defender. Manton, on the other hand, is a contested marking beast in the forward line. His only flaw is his accuracy in front of goal.

Oliver Burrows-Cheng vs Daly Andrews
Cheng is a big bodied midfielder who knows how to throw his weight around in a contest. Like him, Andrews loves the contested ball. A battle between the two could set up an intriguing battle.

Nicholas Baker vs Aaron Clarke
Clarke has been on fire in recent weeks, any ball that comes inside his attacking 50 ends up in Clarke's hands. If he kicked straight he would be leading the competition for goals. He currently sits second with 10 goals for the season. Baker is one of Tasmania's more efficient defender and a likely matchup for Clarke.