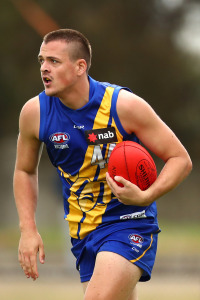 After their previous match against the Eastern Ranges, the Western Jets brought more intensity in the third round with the Calder Cannons. Unfortunately, poor mistakes and skill errors by the Jets saw the Cannons walk out 12 point victors.

From the first whistle Western come out hard, William Kennedy was dominating the hit-outs, and the midfield was enjoying first supply. Unfortunately, a quick slingshot play by Calder had the Cannons claim the first six points. Calder would take over from here as undisciplined play cost the Jets dearly as Calder took full advantage by kicking three unanswered goals. With the Cannons in complete control, the Jets needed somebody to stand up. Aaron Clarke was that man, he took a great contested mark and kicked the first major for the Jets. The reply from Calder was vicious with two goals to regain control. Luckily Samuel Clifford scored late to keep Western in the contest.

The start of the second term had Calder with loose numbers everywhere around the contest. The Cannons won the contested footy and peppered the inside 50 count. Soon missed opportunities by the Cannons became majors and the Jets were in desperate need of an answer. The answer came in the form of Archie Manton who slotted his first for the day. The twin towers for the Jets were standing up but on the other end of the field, the tall timber of Calder was marking everything. They scored again but Josh Honey made a quick reply to give the Jets some relief. Clarke quickly complemented Honey by booting his second of the day to have the Jets trail by 15 points at halftime.

The premiership quarter had Calder with another good start bagging the first goal. A quick bit of play by Western saw Clarke stand up again in front of goal. He kicked his third major as the Jets began to build some momentum. Inspiring work would follow from Jonah Horo who picked the pocket of two opposition players and set up Archie Manton. Manton would reward Horo's efforts with a goal and Kyle Borg struck soon after to keep Calder's lead within three points.

The final term had the Jets shaky. Risky play was rewarded with Cannon fire as the Jets hand-pass game in congestion turned into Calder rebounds. A tug of war would last for 15 minutes but the drought would be broken by Calder.  The Cannons would kick another goal through a 50-meter penalty which sealed the game. The Calder Cannons now have their first win and the Jets will need to reflect on this defeat.

Hero of the Day: Aaron Clarke

This one is a no brainer, anytime the Jets needed a goal Clarke answered. His contested marking inside 50 was first class and his set shots have improved greatly from his previous year. He has become the forward that delivers and is now ranked 4th for goals in the NAB League competition.