Jets Make it Two in a Row 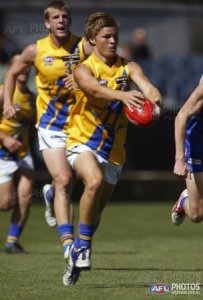 Last Saturday the Western Jets faced off against the Calder Cannons in the Round 9 match up played at Burbank Oval. Both sides were playing for the McDonalds Cup, the second time the sides have competed for the Cup. McDonalds is a sponsor of both Football Club's and a major contributor to underage football.

The Jets were in control of the majority of the match, leading at all of the breaks but were given a major scare by the Cannons in the last quarter. The Jets held a comfortable 22 point lead at three quarter time but the Cannons came out firing early in the last kicking three majors in the first three minutes to cut the lead to 4 points. It was a tight and tough struggle throughout the last with Calder hitting the front and looking like winners before some composure from two of our bottom age boys in Tristan Xerri who took a contested mark 60 metres out, took his time, lowered his eyes and found Stephen Syme on the 50 metre mark. Stephen went back and again lowered his eyes and found Brandon Lester 30 metres out. Brandon went back and under immense pressure, kicked the last goal of the game to give the Jets the lead and ultimately the win.

Xerri was the standout forward on the day kicking four goals and taking four contested marks in difficult conditions. The Jets midfield group of Romensky, Foley and Griffiths were very good all day with Connor Griffiths (pictured above) named best on ground after 23 touches, 8 tackles, 4 clearances and 7 inside 50's. Ryan Carter from also very good in defence keeping the best key forward in the competition Karl Brown to only two goals.

The Jets make it two in a row now and move to 3 wins and 5 losses, sitting just outside the top 8 in 9th spot. We play the Northern Knights this Saturday, June 4th at 1:30pm again at Burbank Oval as we look to make it three on the trot.