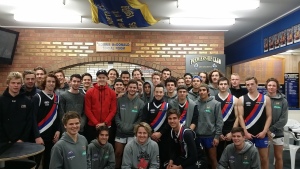 It was great to have former Jets players and current AFL players Corey Ellis and Jayden Laverde at TAC Cup training last night.

Corey and Jayden were both drafted last year in the 2014 AFL National Draft with Corey going at pick number 12 to the Richmond Football Club and Jayden going to Essendon with pick 20.

Both boys have had a taste of both VFL and AFL football this year and everyone at the Club wishes them all the best for the remainder of the season and their careers.

It was fantastic for this year's TAC Cup Squad to hear about their journey so far and to learn of how their first seasons at an AFL Club have been.

Both boys are welcome back to the Club whenever they like and we look forward to catching up with them again soon.