We can now acknowledge that our club was formed in 1905 ; although it is documented that Glenrowan played matches in the late 1890's the club wasn't officially established until 1905. First official match was against Greta final scores Greta 9. 11 (65) to Glenrowan 6. 8 (44) played at Glenrowan. Best for Greta were M. Quinn and Corker. For Glenrowan W and J Reardon, Prichard and Cupples. The newspaper clipping indicates that the Melbourne F.C. (VFL) indicated their desire to play matches in Benalla, Wangaratta and Rutherglen that season. Newspaper article from the Benalla Standard, 7/7/1905. 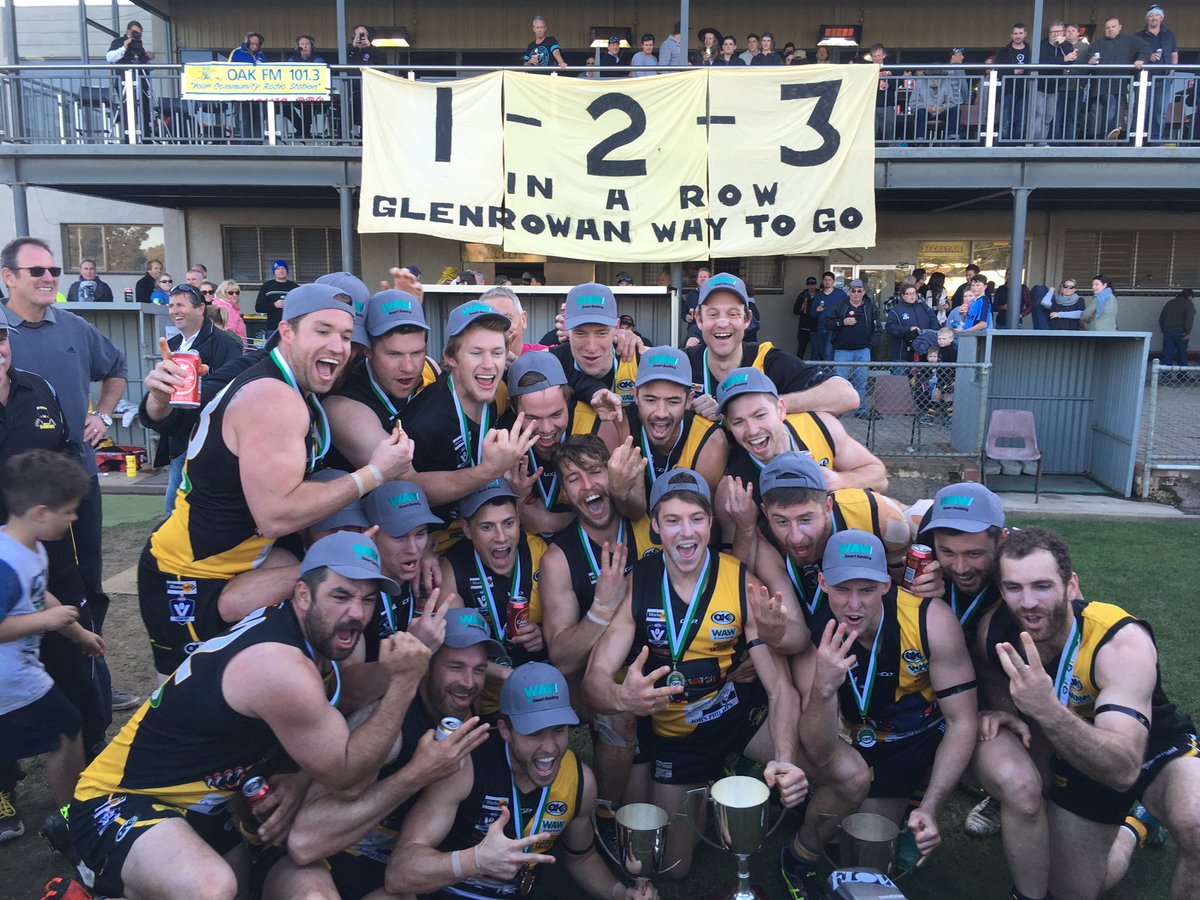 Our Club Our Town

The earliest documented game involving our club dates back to 1894 when Glenrowan played Winton. It is believed that Glenrowan were aligned with Winton winning the flag in 1909 but this has since been proven to not be the case. It was thought Glenrowan/Winton combine won a flag in 1907 but recently discovered newspaper clippings show Winton as premiers defeating Swanpool.

On the 9th of July 2016 premiership medals that belonged to Harry Hamilton McEwan 1907 and 1909 for the Winton F.C. were obtained. This confirmed that in 1907 there was a League called the Glenrowan-Winton F.L and 2 years later the Violet Town F.A. Winton was a stand alone club and it proves that the League name changed regularly depending on the towns participating at the time. The medals were donated to our club because of the information obtained from our website and the medals are now on display at the Sports Complex @ Wangaratta Showgrounds.

In 1909 Winton defeated Baddaginnie but there is no mention of Glenrowan in the fixture. However, it appears the club was officially established in 1905.

Glenrowan played sides from Molyullah, Thoona, Tolmie, Baddaginnie, Benalla Stars, Greta West, Greta South just  to name a few during the early 1900's. The Glenrowan boys of this era were successful in taking out the Wangaratta and District Cricket Associations (A) Grade Premierships of seasons 1909/10 - 10/11. Many players, football and cricket, from this era paid the ultimate price during World War 1. Glenrowan C.C. also won the Wangaratta Sunday Competition Premiership in 1958/59.

Glenrowan is 15 kms South of Wangaratta, 25 kms North of Benalla and is known for it's Orchards, Wineries, Historical Kelly Gang Seige Sites, Cafes and Parks. Our ground is located at Daniel Lane, Glenrowan.

The Glenrowan Kelly Tigers are a family friendly club who cater for football and netball enthusiasts of all ages! We currently field C Grade, B reserve, B, and A grade netball teams and open aged Reserves, Seniors and U/15's football teams.

Glenrowan was named after James and George Rowan who farmed the area  between 1846 - 1858.

The town's first Policeman was Constable Anthony Alexander registered number  1649 who received a commendation for his efforts in the search for the Kelly gang.

What is known as Glenrowan West today was, in fact, Greta in the old days; Greta township eventually moved further east due to the Post Office relocating.

The town folk of Glenrowan not only participated in playing football but also cricket, tennis and the very popular foot racing. The events were held at the Oval and competed in neighboring towns such as Greta, Hansonville, Eldorado to name a few. For all your Rocks, Sand & Stones

* Congratulations to everybody associated with the Glenrowan FNC. We have come a long way from that meeting at the Showgrounds in 2012; finally an O & K Senior Premiership & now the Senior footballers are  the first O&K team to win four flags in a row. Let's stick together and also taste success on the Netball Court....Go Kelly Tigers !

* Our website has been developed over the past 11 years & is a continual work in progress with information, statistics, photos, scores, historical items have been forwarded over the journey. We are after a photo of the club's 1955 Premiership side. Please email.